Just How Much Has Common Changed Over the Years? 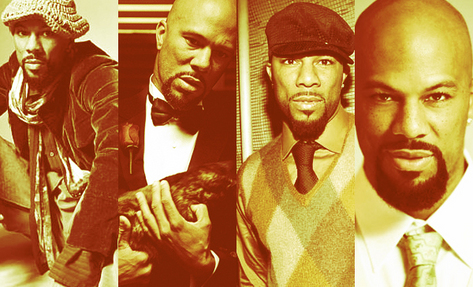 There seems to be a bit of hand-wringing over Common's forthcoming Universal Mind Control. Many visitors to this site reacted with ambivalence or flat-out rejected his most recent videos. And all of the changes the album has undergone over the past year does little to inspire confidence. All of this begs the question: Has Common changed? And if he has, is it for better or worse? Or have we set ourselves up for disappointment because of the expectations we imposed on him?

Common is dope regardless, but let's explore anyway, 'k?

Yesterday, a visitor pointed out something regarding this nefarious EuroTech Busta Rhymes track that escaped the rankest corner of Hell with its head on fire, saying:

I had a friend put something in the air regarding stuff like this and Common's Universal Mind Control track. They may use these types of songs to gain a greater following in Europe. Especially since the Euro and Pound are so much more than the U.S. dollar.

Wait, would Common really...? No! Not our Common. That's crazy talk! But think about it. We are no longer at a point in Hip Hop where "I Used To Lover H.E.R." is even remotely acceptable to the hungry masses because the masses are no longer hungry. And it could be argued that neither is Lonnie. He doesn't need to "Borrow A Dollar" anymore. He is the post-"Sense", post Smokin' Aces Common, one that is able to parlay a partnership with Kanye West into mainstream viability. Arguably more conscious these days, but with an innate ability to convey those aspects of his artistry without offense. This Common is palatable to the masses, here and across the pond.

Some folks aren't happy about that. Buss this:

...he merrily goes around selling himself as a pitchman for everything from Smirnoff to GAP, while simultaneously yapping on and on about his true devotion to hip hop and love and art and The Corner and acting like these "brand partnerships" somehow represent something deeper than just a paycheck.

Ouch, Hamilton Nolan! I'm usually the first to cry foul when I catch artists promoting products that they would otherwise never drink, eat, buy, wear or drive, but none of Common's endorsements thus far seem that contrived. Not even The Gap. But pair all this with his recent videos and lines like "philosophy on top of ya" and the situation may call for deeper exploration. It was recently reported that Microsoft is sponsoring his upcoming tour. Not bad. But I don't get the t-shirt thing:

"I want to be timeless, I want to be international, and those are the things I feel like I'm working toward now," he said. "I liked creatively where they wanted to go. Actually Microsoft and I are about to do a line of T-shirts coming out in November. I'm designing them."

I've always maintained that change and growth are two different things. Some artists, the really good ones, are able to adjust to certain times and trends without losing sense of the thing that initially endeared them to us. Some just go with what's hot to make a buck, and they are tools. The key to artisitic evolution is exploring new ideas (even if they are trendy) and stepping out of your box, while still pushing your product to new creative heights without sacrificing your identity. And although designing t-shirts (of all things, I mean why not a video game?) with Microsoft gives me slight pause, we have to wonder just how much of Common's earlier work in any way indicated that brand partnerships were off-limits.

Or knee-jerk deference. Peep what he had to say about 808s & Heartbreak:

"I love it... Let me tell you, as an artist, you wanna be free. You gotta do what you feel. You can't just cater to the audience. You gotta say, 'Hey, y'all, this is where I'm at.' For him to do an album called 808s and Heartbreak, you know that's where he is at this moment. I heard some songs, and I think it's fresh. I think the people are ready for it."

Good Lord, this man is just cool with everything isn't he? Can I get him to be a spokesperson for SB?

All jokes aside, when it comes to music, particularly Hip Hop, the artist will be measured by his greatest work. For me Like Water For Chocolate set the standard. For others it was One Day It'll All Make Sense. To that end, I have faith that Common's output will be quality but I never hold him to the standard of LWFC because it will never happen. He will never be that good again and neither will his collaborators. Kanye and Pharrell have almost never been able to evoke the musical balance and range that made Common's partnership with Jay Dee so flawless, and knowing that could make the pill that is Universal Mind Control a little easier to swallow.