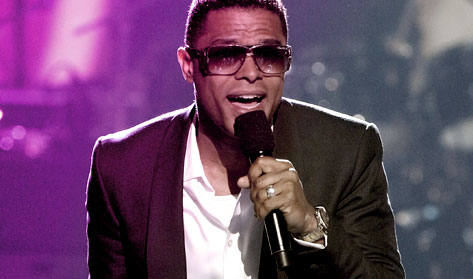 Seven years after his last album was released, the man better known to the world as simply Maxwell (or Fine Ass Maxwell, Sexy Maxwell, My future Babydaddy Maxwell, Where the f*ck IS Maxwell, et al), still sounds just as good, if not inconceivably better, than he did in 2001. Besides a surprise performance at this years BET Awards, where he sang the living hell out of "Simply Beautiful" to celebrate honoree Al Green, our boy has stayed voluntarily out of sight over these past few years. The remainder of 2008, however, is filled to the brim with Maxwell concert dates for which tickets may cost as much as $200 each. On Thursday night Brooklyn's Finest came home to New York City's Radio City Music Hall to delight his hometown crowd with a sold out show nearly a decade in the making.

Before there was a Ne-Yo, a Chris Brown or a J.Holiday for the youngins to swoon over, there was Maxwell's impossibly perfect falsetto. Maxwell was for the women, not the girls. Grown folk music. And evoking the holy spirits of Luther Vandross, Marvin Gaye and James Brown, Max sounded (and looked--don't sleep) like everything we've been missing for so long; even sans his former lion's mane afro.

It should go without saying that chicks went effing crazy before the man even hit the stage. Teddy Pendergrass in 1979 crazy. Bobby Brown in 1988 crazy. Jodeci in '91 crazy. Panties actually got tossed onstage crazy--but more on that in a bit*.

As soon as the lights lowered and the familiar guitar intro of "Get To Know Ya" began, women were shaking and stomping and screaming at the top of their lungs. And by women I mean me. There was really nothing intricate about the stage setup. It was "Big Band" reminiscent, almost, complete with a horn section. The entire band had on suit jackets; the lone female background vocalist a pink gown. There were no laser light displays or skyscraper sized LCD screens. But when Maxwell finally appeared at the top of a short staircase mid-stage, bathed in bright purple lights, black tuxedo jacket and slacks, white dress shirt perfectly unbuttoned, bowtie casually draped around his neck, short curly hair tightly coifed, it was all the decoration the audience required. The screams were deafening. Even the fellas had to give it up.

All the favorite cuts were present and accounted for and came one after another--"No One", "Lifetime", "Sumthin Sumthin", "Ascension (Don't Ever Wonder)"--and all were delivered with the youthful earnest of a performer a decade Maxwell's junior. (This past summer was his 35th). There was the requisite teasing: "Can I sing for you baby? Do you like that?" There were ad-libs designed to titillate--"I wanna take you in the living room and live IN you"--as well as to inform us of his seeming affinity for what he referred to as "healthy cornbread biscuit dripping women." I mean he literally crooned the word "cooooornbread" over and over and over again; the big girls went bonkers. And by big girls I mean me. And there were real moments of intense beauty. During "This Woman's Work" the entire auditorium sang every word of the Kate Bush cover, and Maxwell took a moment to close his eyes and capture the moment. It's rare a performer can invoke such hysteria in stillness but such candid appreciation and humility from such an enigmatic artist is equally as rare.

It would've been enough for the voice to be on point and the moves to work up a frenzy, but Maxwell's hiatus hasn't at all diminished the natural camaraderie he has with his fans. There was a comfort and genuineness to his presence that ranged from good ole fashioned boyish charm to full-fledged goofiness. He was earnestly self-deprecating about his new music, saying, "I know y'all are saying c'mon, man, play the stuff I know! Play the stuff I bought!" But the new material is classic Maxwell. No Lil' Wayne guest verses or poptart of the moment hooks, nothing that would imply he is in the least bit threatened by these new jack R&B singers. The funky bass-laden new cut "Bad Habits," which boasts a jewel of a line that goes a little something like "I feel you from the floor to the ceiling," is a perfect fit in his catalogue. It was also great to hear "Pretty Wings" in its entirety instead of the minute long snippet that's been on his MySpace page for close to a year.

He toggled between sincere prudishness about cussing ("I don't know if there are kids in here") to squatting, thrusting, grinding and humping the stage, the mic stand, the air. This hit a fever pitch during "Til the Cops Come Knockin," which besides maybe "Fortunate", his biggest hit to date, received the loudest screams of the night. This was in no small part due to the fact that he preceded the song by saying--and this is verbatim--*"There are not enough panties on my stage." One rather ample pair of draws was soon to follow and, not missing a beat, Maxwell's response was "Damn girl, you got some junk in your trunk. I do NOT mind." He did tell us he likes 'em "healthy." The panties went around his neck. Apparently this is a choreographed part of the show, big draws and all, but who cares. The women ate it up.

The encore, "Whenever, Wherever, Whatever" and an additional new dancehall-tinged song entitled "Cold," was like a heartbeat building to a final climax. Maxwell's voice tickled like fingertips on the back of a neck and glided between that sweet falsetto and a deep rumbling growl. Al Jarreau meets Isaac Hayes. His excellent band had an opportunity to introduce themselves and they repped their cities--from LA to ATL to Cleveland, OH--to the fullest. But tonight was the hometown boy's night. And New York is proud of its native son. Welcome home, welcome back.


TAGS:  concerts, maxwell
Previous: Not Corporal But ‘Classical’ Punishment? Next: DC: ‘Can A Sista Rock a Mic’ is Coming to Its Climax!