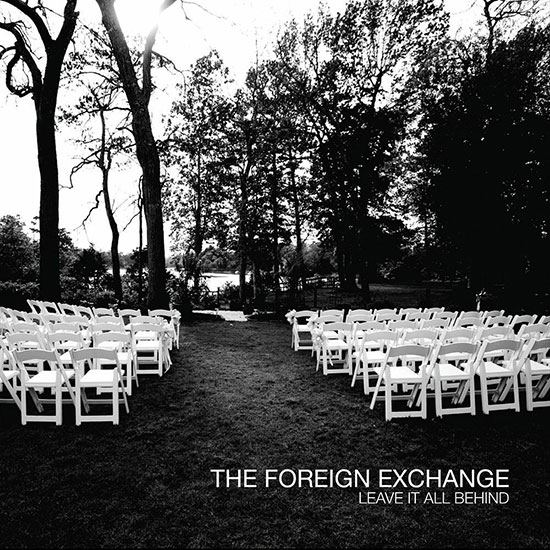 It has been four years since The Foreign Exchange's Phonte and Nicolay offered us their vision of what "soul hop" could be with Connected. While not as many may have been clamoring for their return as say Maxwell, Lauryn or D'Angelo, their new album is proof that we should have been. Leave It All Behind is at its worst a beautiful moment in the great expanse of your life.

Relying much more on Phonte's vocals and less guest appearances by emcees, Leave It All Behind is an album that flows, never ebbs, as each track passes by. Like the petals of a rose, each song is individual and distinct, delicate and balanced. And while the tracks are worthy on their own, they unfold onto each other in a way that is most appreciated when heard as a whole.

Leave It All Behind is the type of album that can be played anywhere and at any time. I would, however, recommend playing it when you want to bring the mood down a bit, say driving a long distance, calming a cranky child, doing household chores or after a lengthy argument. Its subject matter is unsurprisingly about love as most songs have been and will be. The distinct difference between this album as it relates to most other R&B albums out there on the market is the lack of Auto-Tune, the lack of verbal groping, the lack of unsolicited forays into waxing poetic about every part of a woman's anatomy in gruesome detail. What the listener is left with is the musings of a man who is grown, with responsibilities both to himself and his beloved, who has obviously been dabbling in '80s pop, '90s R&B, soft rock, jazz and a little emo for good measure. Guest appearances include Darien Brockington who was also featured on Connected and, more recently, Zo! & Tigallo Love The 80s, but most of the album features Phonte's smooth vocal stylings. While Yahzarah makes a return appearance on this album, it's the pairing of Muhsinah and Phonte's voices that in hindsight is as effortlessly stunning as Donny Hathaway and Roberta Flack.

Out of the eleven songs on this album, the one that continues to stand out for me is "Daykeeper," which is to date my most favorite song that I've heard this year. Having no idea what the lyrics actually amount to, I finally settled on it being a love song that expresses the love a mortal man has for a Sun Goddess. Much like some Roman and Greek deities would fall in love with mortals. Once I heard the sequel to "Daykeeper," "Valediction," I realized that somehow the Goddess assumed mortal form and got kicked to the curb by her mortal flame. As cold-blooded as it is to hear, "This place is no longer yours ...Our love is such a rush / But inside it's slowly killing me ... Nothing's been more true / Than these words to you," only a person who has lived and lost could pen those words.

There are several moments of emotional identification that most listeners will encounter, most of them warm and fuzzy, while some of them are sad. The best way I can describe my initial impressions of this album is that I will likely listen to this album until my ears bleed from it being overplayed. And then I will listen to it again. And again. And again. Here's to hoping that your ears will be bleeding as well.

Leave It All Behind [Amazon][iTunes]