The Not-So-Secret Life of A. Keys 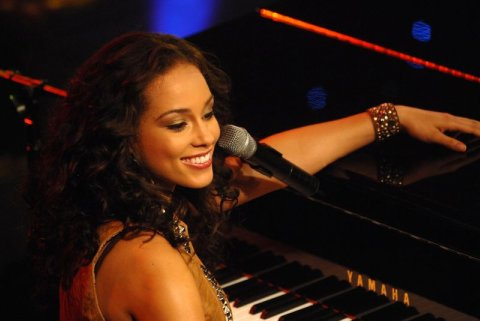 Let's be clear. These days, Alicia Keys is everywhere. Starting today, she's on the big screen starring alongside an all-star cast in the film The Secret Life of Bees. She's also fresh from collaborating with rocker Jack White, recording the song and video for the newest 007 theme song, "Another Way to Die" from the upcoming Quantum of Solace, out in November. Ms. Keys is also still on the Europe leg of her tour in support of her 2007 release As I Am, and after taking a break to support her charity Keep A Child Alive in December, will resume the tour in Australia. Throw in her activist work encouraging the masses to vote, and see? Everywhere. The "superwoman" has no plans of letting up anytime soon, either. Yes, the 27-year old will be taking a break from music once the tours end (which actually follows Keys' pattern of producing new music every other year, as she's done since her multi-platinum, Grammy-winning debut in 2001). With so much buzz surrounding what some outlets have called a "scene-stealing" performance in the Sue Monk Kidd adaptation, there will definitely be more film roles for Keys: playing a witch in a remake of the 1958 romantic comedy Bell Book and Candle, and, in a role more close to home as biracial musician Philippa Schuyler in Composition in Black and White. Recently, Keys, who with the increasing roles can now add a slash to her title, sat down with the OttowaCitizen.com, where she spoke on everything from her Bees role to who, er, "bees" her inspiration.

On her role as June Boatwright, 1960s burgeoning civil rights activist in Bees:

"June is phenomenal. I love her very, very much. It was my desire to make her as spectacular as I know she is. I explored what were
her driving forces and what brought her to those places. You hold onto
things to your own detriment. The preparation took a lot of
self-searching and conversations with the sisters to understand their
past."

On whether acting is as satisfying as singing:

"I'm not sure if that's a fair question, because as a creative
individual, I think you want to be able to express yourself in any way,
in every way. I find a lot of musicians are painters and
also photographers. I don't think that it's just one thing to do. I
would think I would say music, because, obviously, I can express my
thoughts and my feelings and the things that I experience in this
world, and I do, but there's a limit to that. I can go all the way
musically, but after that, there's a bit of a limit. And then with
film, you kind of can pass that limit."

On why co-star Queen Latifah is her ultimate beauty icon:

On how Barbra Streisand became her inspiration:

Alicia Keys: She sings, she acts, she smoulders [OC]