Live On the Scene From S.O.B.’s

As any regular visitor to SoulBounce has noticed, the good people at S.O.B.'s in conjunction with SB have been lacing our NYC Bouncers with free tickets to select shows for the past few months. It's the least we can do to repay our fans for their continued support. And it's always great to hear back from our giveaway winners with their first-person accounts of the concerts and how much they enjoyed themselves. Check out the reports that we received from last night's Sol Village showcase and the recent Anthony David and Emily King show after the bounce.

Here's the 411 on Sol Village from giveaway winner Larissa:

I want to thank you again for the tickets to Sol Village. The show was
absolutely amazing and the artists were beyond dope. Eric Roberson got
the crowd in a good mood early on, and you should have seen all the
ladies moving closer to the stage to hear him sing. Jessie, the
chanteuse from London, brought the house down and had the crowd dancing
and mesmerized with her lyrics and vibrant personality.
Definitely someone to look out for. As well as Lance Drummonds. He has
a little of that John Legend flavor. I found my head nodding time after
time in beat with his lyrics. I had an amazing time all thanks to
SoulBounce. 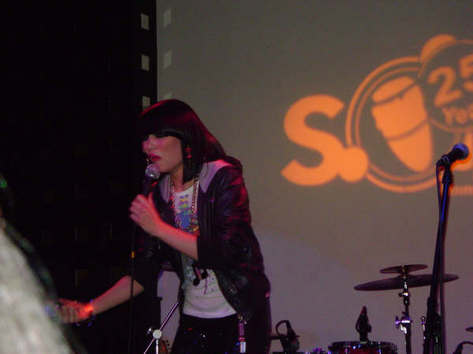 And that's not all, here's what Sol Village giveaway winner Kelly, who supplied us with these photographs of Jessie and Lance Drummonds, had to say about last night:

Just wanted to give you a quick update on yesterday's show. We had a
great time and enjoyed the acts that we were able to see. We came in a
bit later and only stayed for a couple hours but we were able to catch
the last half of Brooklyn Red's set, Sofia (Eric's intro for her was
wonderful), Jessie (my fave act of the night--she's so cute and
spunky--her voice is fiyah as well. She definitely woke the place up a
bit!) and Lance (who was also great--complete with 'sing-ahs' and
everything). 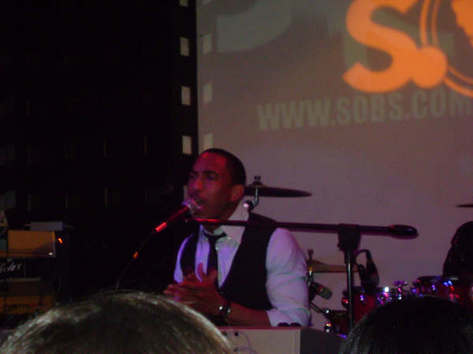 Rounding out the reports is this account of the November 5th Anthony David/Emily King show from giveaway winner Bukky:

The night started at nine with a performance by Grammy-nominated artist
Emily King. She wore a flowy white shirt with a black jacket over dark jeans. She came on with her band and played cuts from her
debut album East Side Story, released last year. She played the
Beatles classic "411," "Walk in My Shoes", which she gave a rock
edge to, "U & I" and "It Was You," among other album cuts. The
crowd cheered and sung along with her, their favorite being "U &
I." In the middle of the set, she talked about being excited for
Obama's presidential win. Her set was brief (about 40 minutes), but it
was energetic.

Around 10 pm, the main act, Anthony David, came on
stage. The crowd drew in closer and got bigger and louder. He wore a
green hoodie over a grey shirt and sang selections from his critically
acclaimed new album Acey Duecy, in stores now. Among other songs, he
sung "Georgia" a song about his hometown and asked the crowd if there
was anybody from Georgia.

The only thing that would have made the concert better
is if the performers had introduced the song titles before they sang
for the people that weren't familiar with them. All in all, I had a
great time listening to great artists.

Many thanks to Larissa, Kelly and Bukky for sharing their stories with the SB fam. If you want to have a good time like these folks did and have your own stories to tell, then keep it locked on SoulBounce and be sure to enter our upcoming giveaways.