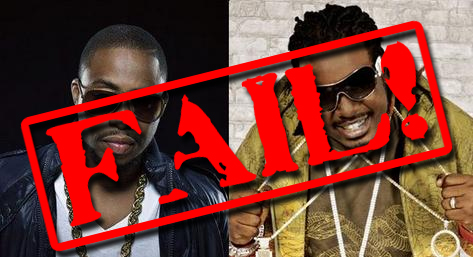 I'm really starting to wonder about Raheem DeVaughn. First, he didn't know the lyrics to Prince's "Adore" at a concert SB staff attended earlier this year, then he allowed R. Kelly to molest his music, shortly thereafter he made a tacky music video, and now he's really jumped head first into the deep end of wackness with a T-Pain collabo on the new song "Club Hop." Have you ever heard a song so utterly horrendous that it made you want to cuss? This, my friends, is that kinda song.
The previous bad looks were semi-forgivable, but this ish right here? Put it this way, next time I see Raheem in the streets of DC someone is seriously gonna have to hold me back from running up on him and doing a Rambo behind this foolishness. OK, OK, maybe I'm just joking about the physical violence, but I'm really having a hard time wrapping my mind around why someone with so much talent wasted studio time to record this trifling ode to love in the club that includes references to making women walk bowlegged after restroom sex or some such nonsense. And T-Pain's obnoxious presence is the busted cherry on top. If Raheem was interested in selling out making a club banger, then he coulda done a way better job than this hot mess.