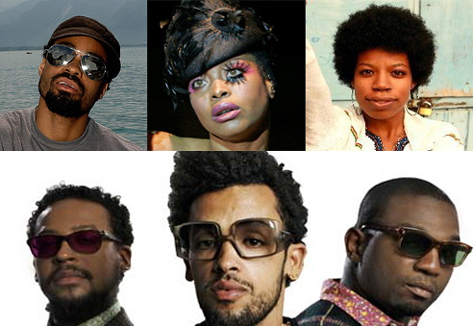 We haven't heard a whole lot from Erykah Badu for quite a while, and there's a good reason for that: she's finished her world tour in support of New Amerykah Part One and she's expecting a child next year. Now that Erykah can rest up a bit, it seems as though the producers of the song "Master Teacher," SA-RA Creative Partners, have made available alternative versions of the song. While Bilal and Georgia Anne Muldrow provided background vocals for the version that we have become most accustomed to, the alternative takes features either Bilal singing lead while Georgia sings in the background, as it was originally intended, and vice versa. After the bounce, a special "Teazer" for those who wish to finger snap and head bob courtesy of SA-RA. You can download the Fresh Selects Exclusive EP, courtesy of SA-RA's Shafiq Husayn, containing all three songs here. Muchos gracias to Kenny Fresh for this.