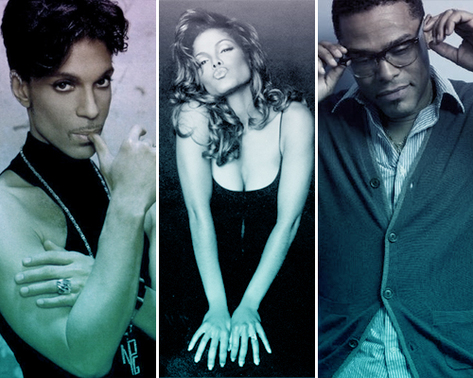 We recently consulted the fam for its ideal "Get Busy" music selections, and it resulted in one of the most epic email threads known to man. (I forgot to use the "BCC" Fail.) This isn't really a surprise; people jump at the chance to do inventories of tracks like this. So this presented us with the arduous task of slimming the selections down, or else we'd be here forever. And if you're reading this at work, it may just put you in a very uncomfortable position for the rest of the afternoon. Join us after the bounce as we recount some of our favorite slow jams that facilitate a romp in the sack, and don't forget to add yours in the comments. Then run home, fire up some Barry White and put a bottle of pink Champipple on ice. It's getting cold outside...

(DISCLAIMER: The descriptions get kind of raunchy. Get your child away from the monitor immediately! This blog entry is only for the "Grown & Desperate.")

Aaliyah: "Never Giving Up"
"The late Miss Haughton captured raw sensuality with this duet song. The synths were very Isley Brother-ish while the lyrics ("feels so strange/when I was on the train/I cracked a smile when I thought of you") were gritty and realistic." - Fave

Beyoncé: "Speechless"
"By far my favorite track from Dangerously in Love. The instrumentation vaguely reminds me of something the Isleys would've used and she employs these kind of restrained, deliberate vocals until the climax. Beyoncé at her best." - nOva

Bilal: "Soul Sista"
"'You must be my soul sista.' That's some sexy ish!" - Vivrant Thang

Bob Marley:
"Turn Your Lights Down Low"
"If anyone knew anything about facilitating reproduction it would be Bob". - DJ Stylus

Boyz II Men: "Uhh Ahh (The Sequel)"
"This is my all-time favorite ballad. The harmonies don't get any tighter than this! And the French-speaking girl doing the sexy, Puff Daddy ad-libs in the background???? Priceless!" - Fave

Carl Thomas: "All of My Love"
"Not a big CT fan, but this slept on song from the "Emotional" album stays in rotation to this day. Very sexy with just a touch of Motown strings." - Fave

D'Angelo: "One Mo'Gin"
"Less obvious than 'Untitled' but still smoldering and riddled with innuendo." - Ro

D'Angelo: "Untitled (How Does It Feel?)"
"If you're not involved when this comes on, you might as well hang it up, otherwise you'll be grabbing the nearest stranger and catching a case. D'Angelo probably aided in siring many bambinos to this joint. Old school and sensuous like Marvin, the Isleys and Prince rolled into one. This song is dangerous!" - nOva
"By the time he starts screaming, you'll probably be screaming, too." - Butta

Darien Brockington: "Come on Over"
"New millennium sexy swag oozes from this ballad from the Little Brother hook-man. The lady singing on the hook reminds me of Shirley Murdock while the harp and NewJackSwing beat cadence is perfect for nocturnal extracurricular activities." - Fave

Floetry: "Say Yes"
"Marsha, Marsha, Marsha." - Ro
"...always melts the panties and boxer briefs. Nothing is sexier than revealing a crush and being that emotionally vulnerable." - ill Mami

Ghostface: "Camay"
"The Hip Hop version of a Teddy P song. Gruff, sexy, and unapologetic all at the same time." - ill Mami

Guy: "Tease Me Tonite"
"Drips with sex. If it weren't for the masturbatory scene at the end, this song would be perfect." - ill Mami

India.Arie: "Brown Skin"
"Sexy in a way that doesn't make you feel naughty. It captures Black love and sensuality in a way that few slow jams can manage." - nOva

Intro: "Come Inside"
"If this song doesn't make you moist, I don't know what will." - Butta

Janet Jackson: "Anytime, Anyplace"
"...cause when this came out it aptly described what kinda ho I was." - Cornfed

Janet Jackson: "Anything"
"The perfect 'come inside from the rain' joint. Janet's slow jams have that vulnerability and emotional nakedness that don't rely on sleaze or vulgarity. This joint totally does me in." - nOva

Janet Jackson: "Funny How Time Flies"
"A junior high basement slow drag classic that has achieved timeless status now that we're grown up. Now that I think about it, this was way too grown for us at the time. The guitar and electric piano lines underneath Janet's spoken parts... whoever wrote those is a god(dess) among men." - DJ Stylus

Janet Jackson: "Rope Burn"
"It's got a nice, energizing rhythm and it's Janet." - Ro

Jill Scott: "Imagination (Crown Royale Suite)"
"'I feel like the moon is under the sheets with us now...' A new recruit from the bonus version of The Real Thing. Makes lovemaking sound like the discovery of a rare jewel. And Jill Scott is probably one of the sexiest sistas alive." - nOva

Jodeci: "Come & Talk To Me"
The original version, not the Bad
Boy Remix: The harmonizing sounds perfect like how how two bodies fit
perfectly when you're making love. - ill Mami

Keith Sweat: "How Deep Is Your Love"
"This song is the opposite of birth control." - ill Mami

Kelly Price: "So Sweet"
"Declares just how orgasmically good it is with every chorus." - Cornfed

Kenya Gruv: "Top of the World"
"I wouldn't be the Vibe
Conductor if I didn't remind you of at least one forgotten yet PERFECT
gem. In a crowded field of amazing tunes by Jodeci, Guy, New Edition,
Troop, etc., this joint nails the early '90s slow jam aesthetic. They
don't make soundtrack albums the way they used to. Word to Menace." - DJ Stylus

Loose Ends: "Symptoms of Love"
"It's not even a minute and a half long but its brevity is balanced by its potency." - DJ Stylus

Luther: "Make Me A Believer"
"...sets an undeniable mood and it essentially says everything that needs to be said." - Cornfed

Maxwell: "Submerge: Til We Become the Sun"
"Maxwell is pretty much the king when it comes to the nuance of a love song. 'Submerge' is orchestral, spiritual, vaguely cinematic and is totally what lovemaking would sound like if it was done by instruments." - nOva
"Beautifully vulnerable with just the right build. The perfect 'cough' groove." - Cornfed

Maxwell: "The Suite Theme"
"I love that he included that break of silence in the middle of the song so that you can hear yourselves making it do what it do." - Butta

Maxwell: "Sumthin Sumthin (Mellosmoothe)"
"The version from the
Love Jones soundtrack - You see what it did to Darius Lovehall and Nina
Mosely. Nuff said." - Vivrant Thang

Maxwell: "'Til The Cops Come Knockin'"
"Exactly, Maxwell. The message is the key." - Ro

Any song from Miles Davis' Kind of Blue:
"If you get lucky, this will be on repeat and no one would be able to notice or care." - ill Mami

Prince: "Adore"
"A classic from my youth. My exes remember me from this song but the husband actually personifies the song." - DJ Diva

Prince: "International Lover", "Do Me":
"Both of these have long afterludes...which provides for a lot of uhm...afterplay." - DJ Diva

Prince: "Scandalous"
"Tonight why don't we skip all the foreplay Mama. And just get down here on the floor" *fans self* - Vivrant Thang
"Just 'cause the thought of him in that red suit and red heels does something to my underwear.." - DJ Diva

Raze: "Break 4 Love" (English Mix)"
"This song will have you coming out of your clothes on the dance floor." - Butta

SWV: "You're Always On My Mind"
"Slept-on duet. Coko & Brian Alexander Morgan make beautiful music together. I favor the one from the album as opposed to the one in the video. Prime high school dance-floor grinding sessions to this." - ill Mami

Tank: "Slowly"
"Wow. I know this is a list about lovemaking songs but Tank practically takes it to church on this one. I'll be rocking this in my iPod on the way to Hell, thankyouverymuch." - nOva

Teddy Pendergrass: "Turn Off The Lights"
"The bear proves overwrought authority can be very sexy." - Cornfed

Tony! Toni! Tone!: "Loving You"
"Mid-tempo song, yes, but the crescendo that the song builds into is very similar to...um...the deed." - ill Mami

Zero 7: "Destiny"
"I'm bookending [my] list with polar opposites. Where J*DaVeY is about maximum freak, this joint plucks the heart strings like the acoustic guitar that opens the tune." - DJ Stylus

Cajmere: "Percolator"
"At some point, the candles burn out, the lavender pillow mist smell
fades and massaging each other's intestines to the rhythm slower than
90bpm gets boring. Time to sweat out your perm and show your lover you
mean business. Send 'em to work bowlegged...and this song evokes just
that." - Fave

"Somebody gon' get PREGNANT!" - © Tracy Morgan