Alicia Keys Gets Less Than Five Grammy Nominations For Once, Sparks Conspiracy Theories 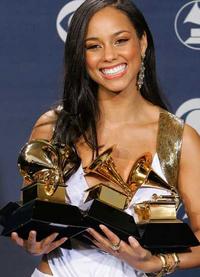 It's all fun and games until Alicia Keys gets shut out of major Grammy races-- then it's a conspiracy. While still nominated, Keys is one of a few artists whose exclusion from certain Grammy categories is sparking interesting gossip at the LA Times blog (see also: Leona Lewis, Mariah Carey, and Ne-Yo). Though the point made about the absence of As I Am from Best R&B Album considering its remarkable success is a reasonable one, it also fails to consider the quality of the other albums nominated in that field. Raphael Saadiq's The Way I See It? Eric Benét's Love and Life? Here's a conspiracy theory: albums nominated for Best R&B Album actually contain R&B music. How is that possible?!

Here's another theory: the music of Alicia Keys, though decent enjoyable and worthy of the Grammy Awards she's earned, is not necessarily R&B. Especially when compared to Al Green and Boyz II Men (even Jennifer Hudson).

Her absence from R&B categories may not be a free pass for lesser artists, as implied. It could also serve as a reminder that there is more to R&B than Alicia Keys. Methinks the shock is just a residual withdrawal symptom from the Grammy Awards peddling Alicia-Ade for so long.

What do you think? Is her exclusion from R&B categories an outright snub or warranted?