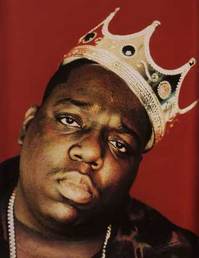 The reason I've always had a blazing Clair Huxtable side-eye for the Notorious film is because, so many years later, folks are still finding ways to profit from familiar B.I.G. material and mythos. Rarely is there anything new added to the catalog or the story, only slight twists in the presentation seem to warrant all this pomp and circumstance. Don't get me wrong, Christopher Wallace is my #1 favorite artist of all time. I simply don't think there's enough to his body of work from which to constantly mine any material. I make proper intellectual concessions when the proceeds go to his foundation. Otherwise, what is there left, musically, to learn about The Notorious B.I.G.? Not much, judging from the film's soundtrack, which is due to be released on 1/13.

Good Lord, I thought that abominable Biggie Duets was the "Final Chapter." Let's break this piping hot mess down for a second:

(1)The stuff we already have: Please somebody out there explain to me the utility of releasing an album made mostly of songs like "Hypnotize" and "Juicy"? This is lazy. Between the albums these songs were actually commercially released on and subsequent Bad Boy compilations, we have these songs five times already. This, my people, is filler. We get that Biggie can't record any new songs, but putting this together required little-to-no effort on the part of the producers.

(2) Couple of new joints: The Jay-Z and Jadakiss tracks should've been the foundation of this album. When we consider the timeframe of the narrative, it makes sense that mostly original Biggie singles would account for the film's musical motif. However, releasing a soundtrack should be an opportunity for the label to have some of Biggie's closest friends and colleagues come in and record new tracks that evoke the feel of classic Biggie and Bad Boy without directly copying him. The Jay-Z "Brooklyn" track does a pretty good job of that. Also, as long as Jigga, Lil' Kim and Diddy have been sampling and re-fashioning Biggie's vocals and lyrics, why not just go all out here? Now you decide to scrounge up some integrity?

(3) CJ performing "One More Chance": This was the song they decided to have Biggie's 12-year-old son remake? I can't wait to hear how they flipped the lyrics so he wouldn't sound like a little perv.

(4) Unreleased demos: This may be the sole reason some might cop this soundtrack, or at least wait for these tracks to leak. Actually, it wouldn't surprise me if someone already had them. How many times have you tracked down an unreleased Biggie joint only to find you already knew the entire song by heart?

I'm starting to think these people are trying to make me hate Biggie. Why am I tired of my favorite artist? Why can't I just enjoy him without the stain of this movie, remixes, "unreleased" tracks and "duets"? And can we all just collectively admit that, while Biggie made Bad Boy good, the label itself is his legacy's cross to bear?

After this movie is released, goes to #1 first week, and experiences a 75% drop-off in the next, I want them to officially leave Biggie alone. Everything released since Born Again has been like watching someone kick a casket and going "You feel that?"