SoulBounce Honors 2008’s Album of the Year: The Foreign Exchange’s ‘Leave It All Behind’ 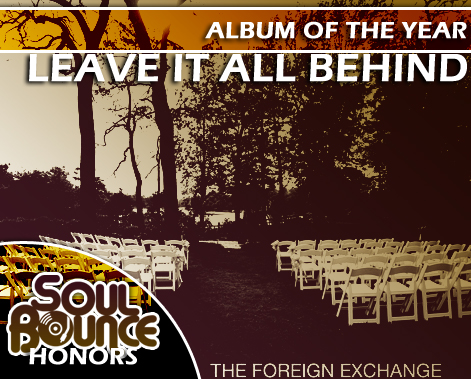 The Foreign Exchange's Leave It All Behind took us all by surprise.

First we were surprised that the album even got made. After a four-year hiatus, when the duo of Phonte and Nicolay announced that FE was dropping a new disc this year, hip-hop fans rejoiced. Any true head worth their salt more than likely still rocked Connected, so to hear that a new album was on the way was the best news ever. In production since 2006, the sophomore set was on track to pick up where the debut album left off. But that's where we were all wrong.

Everyone thought they knew what Nicolay and Phonte were going to do, but their next move revealed that this was a game of chess not checkers.

The trio of video teasers should have tipped us off that Leave It All Behind was something different, special. The instant message conversations from the videos upped the ante on intrigue. The album cover simply added to the mystery. When the first single "Daykeeper"
dropped, we were all caught out there at the sheer beauty of the tune. One of the dopest emcees in hip-hop today, Phonte traded in his
baseball hat and t-shirt for a fedora and buttondown, transforming into a soul man right before our ears with the accompaniment of Muhsinah. The LIAB sampler followed and gave us a five-minute taste of heaven. The tone of the samples was different than the music found on their freshman release, but not enough to raise any red flags that they were on the brink of a sophomore slump. Quite the contrary.

When Leave It All Behind was finally released in October, it defied all expectations. This was not Connected 2.0. This album represented an evolution in The Foreign Exchange's sound. Unlike their hip-hop heavy debut, there were only two tracks to contain rap verses. Otherwise, LIAB was a straight-up soul album, which to many was the biggest surprise of all. However, this wasn't the type of watered-down soul or tired R&B typically heard on urban radio nowadays. LIAB was progessive soul with a wink and nod to the past that sounded fresh without resorting to gimmicks or played out trends.

Lastly, we were surprised at how fantastic the album was. You could listen to Leave It All Behind over and over again and not get tired of it. Enlisting the vocal talents of Yahzarah, Darien Brockington and the aforementioned Muhsinah, Phonte also sang on the majority of
this album and had the nerve to sound good. Nicolay's stellar production on LIAB stood head and shoulders above that of the majority of "big-name" producers who played Recycle That Beat this year.

One thing that no one should be surprised about, however, is that SoulBounce chose The Foreign Exchange's Leave It All Behind as our Album of the Year. The choice was easy and a given. Nicolay and Phonte created something beautiful, something incredible, something timeless. If there was ever a perfect album in 2008, Leave It All Behind was it.


TAGS:  darien brockington, muhsinah, nicolay, phonte, the foreign exchange, yahzarah
Previous: Who Do You Want To Record A Christmas Album? Next: Celebrating the Spirit of Black Santa