A B.I.G. Deal? It’s Beginning To Look Like It 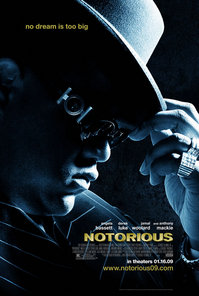 Are you excited yet? Are you pumped up? It's t-minus two days and counting until the official big screen release of the Fox Searchlight film Notorious. We'll be the first to admit that this project was met with great, great skepticism, especially when the casting was announced last year. But then something happened. The behind-the-scenes clips from the set started showing up online. And suddenly, we stopped shaking our heads and started bobbing them instead. Our collective side-eye stopped twitching when the extended trailer surfaced, and shots of 1990s Brooklyn, the beats that defined the era, and Biggie's smooth vocals flooded our laptops. I mean, do we wish Angela Bassett would've at least tried to channel Voletta Wallace's Jamaican accent? Of course. And do we really believe Anthony Mackie as Tupac? Nope. But even that's not enough to curb our enthusiasm over what could be a pretty B.I.G. deal. Even Lil Kim's latest shenanigans can't shake us.

One thing's for sure, Fox Searchlight is all in, spending significant marketing dollars to back the film, placing multiple commercials during prime time on the major networks. Check the video below, as some of the major players, including Diddy, Ms. Wallace, Mary J. Blige, Mark Pitts and Jadakiss (and his gum...SMH)
spoke to MTV cameras at last week's New York premiere. Hell, even when Diddy says that the film exceeded all expectations, and that if it were wack, people that have seen it would've killed it already, that's not so unbelievable. Since B.I.G. is clearly a favorite here at SBHQ, all of us will probably check the film at some point this weekend. Let us know if you plan on doing the same. [MTV]