12 Jam & Lewis Tunes You Should Know 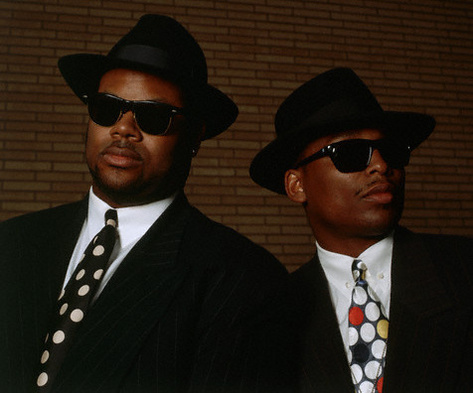 I find it a literal offense if you don't know who Jimmy Jam and Terry Lewis are. OK, I'm not that harsh, but if you consider yourself a R&B music enthusiast and you have no clue, I might have to lock you up for hurting my feelings. Crafting what is known famously as the Minneapolis Sound, Jam & Lewis began their careers in the Prince-formed band The Time, back in the early '80s. After falling out with Prince, the duo left the group and forged a successful production career that has since spanned to three decades and a bevy of artists since. Jam & Lewis are most well-known for producing and literally reforming the career of Janet Jackson, but there are some other key tracks that they have put their name on. What are they, you ask? Well, here's a list of 12 Jam & Lewis productions that I feel should give you an inside scope of their career as it's as varying as a salad bar.

1. Cheryl Lynn: "Encore"
There is a misconception that Cheryl Lynn is a one-hit-wonder, as her 1979 hit, "Got To Be Real" is frequently used in shampoo commercials and chick flick montages. This is false advertisement as Cheryl actually had another #1 hit (but technically on the R&B charts). The fabulous Jam & Lewis production of the 1983 track, "Encore" is the hit I'm speaking of. When Cheryl belts out that her man's love deserves an encore, she means it. The video is horrifically bad (see link above to be whisked to Hilarious Hills), but the song is funky to the hilt.

2. The S.O.S. Band: "Tell Me If You Still Care"
It's hard to pinpoint when Jam & Lewis's sound really skyrocketed into common musical knowledge. Some say Cherrelle, others are Janet all the way...for me it's The S.O.S. Band. The S.O.S. Band were a band that seemed to have been doomed to perform disco-funk romps after disco was officially deemed dead (see "Take Your Time (Do It Right)"). That was until Jam & Lewis transformed them into a sleek synthesized funk band with a handful of '80s soul classics. The brooding opening cut to the On The Rise album has been sampled by the likes off LL Cool J and even Mariah Carey. Still the original is one to treasure as it marks the time on how the soul ballad got a makeover.

3. Alexander O' Neal and Cherrelle: "Saturday Love"
Alexander O'Neal and Cherrelle were among Jam & Lewis's first clients and together they made for great duet partners. On 1986's "Saturday Love" the two gave one electrifying vocal about lusting in love on the weekend. This slow jam is '80s ballad gold. What I like about it is that it's not dripping with too much sap a la "Endless Love" and that you learn the days of the week as Cherrelle and Alex repeatedly recite them throughout the song.

4. New Edition: "Can You Stand The Rain"
With the exiting of Bobby Brown and the addition of Johnny Gill, New Edition went under a serious transformation in 1987. With the release of their classic N.E. Heartbreak album, New Edition had turned over a new page. They went from singing giddily about "Popcorn Love" to being manly MEN and wondering "If It Isn't Love." Jam & Lewis give the boys their first serious ballad and it's quite the debonair one. Perfect to croon along to in your hairbrush to. Wearing a fedora is optional.

5. Cherrelle: "I Didn't Mean To Turn You On"
Know me, and you know I dig hard on some Cherrelle. Her 1988 album, Affair is one of my top 10 favorite albums of all time (no joke) so I won't try to squeeze a song from that album on this list...but if there is one Jam & Lewis track that is the nougat center of Cherrelle's career it's this electro-charged dance number from 1984. Often imitated but any cover can never duplicate Cherrelle's spunky delivery of the ultimate put-down.

6. Boyz II Men: "On Bended Knee"
Boyz II Men outdid themselves with "On Bended Knee," and they had Jam & Lewis to help them out. Most like to gush over the sappy Babyface concoction "I'll Make Love To You," but I find the group's 1994 hit, "On Bended Knee" to be a bit more sincere and not as over the top. It's a nicely streamlined ballad that effectively shows off the quartet's vocal talents. And yes, it's great for being swoon worthy with your special someone.

7. The Human League: "Human"
This is an often overlooked look track by the British New Wave outfit The Human League and personally I love it. The group enlisted Jam & Lewis for their 1986 album, Crash, and nestled in it was the brooding reflective piece known as "Human." The duo didn't distract from the stark synth sounds the band were famous for and it made for quite a mix. New wave never sounded so soulful.

8. Janet Jackson: "Nasty"
Literally pick any Janet song between 1986-2001, and you've got classic Jam & Lewis right there. So I was hard pressed to pick one song from Miss Jackson's time with them that would fit this list. So don't get "nasty" with me for picking Jan's 1986 hit, "Nasty." I picked it mainly for three reasons: It features the famous line, "Miss Jackson, if you nasty," the beat literally bites you in the arse and Paula Abdul choreographed and made a cameo in the music video.

9. Alexander O'Neal: "Innocent"
All you need to know is that this song is 11 minutes of rub-it-in-your-face-eat-it-up-and-swallow-it synth funk. Jam & Lewis weren't playing around when they gave Alexander O'Neal one of his most vibrant and well-known tunes. Off of O'Neal's 1984 self-titled debut, the track is essential '80s funk and rocks you steady till next month.

10. Jordan Knight: "Give It To You"
Laugh all you want, but this song is a diamond and one of the greatest things Jordan Knight has ever done (well, aside from the New Kid's "Step By Step" dance moves). Written by Mr. Sexy Pants, Robin Thicke, and produced nicely by Jam & Lewis, this song has a warm spot in my heart for late '90s nostalgia. It's got everything a song at that time had, a skittish hip-hop meets pop beat, burbling synths, slight innuendo messages and a chorus that will remain lodged in your brain for days.

11. Usher: "U Remind Me"
Flashback to 2001 and Usher was just becoming grown and sexy. Note "just." After being a teen sensation with his 1997 My Way album, Usher took some major sexy pills and unleashed 8701 in 2001 and made females faint at the sound of his voice and by the drop of his pants. "U Remind Me" was the first single lifted from the album, and it was a welcoming return for him.

12. Crystal Waters: "Say...If You Feel Alright"
Obscure to the core, yes, but personally this is Crystal Waters best song. What it's not "100% Pure Love"? No, because it wasn't produced by Jam & Lewis, that's why! The song is featured on her low-selling, self-titled 1997 album, and it oddly was the theme song to the sports special, NBA At 50. Featuring a nicely threaded loop of Earth, Wind and Fire's hit "Septembro" this soulful strut is a perfect and tight mid-'90s party jam.

Originally posted at Adventures of An Audio Diva