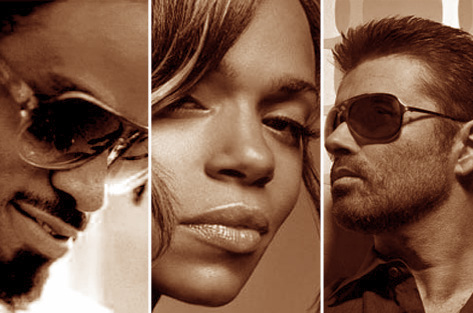 We here at SoulBounce are avid purveyors of the sexy. You needn't search far for supporting evidence of this. How could we not be? The music we love and promote on the site often lends itself to a level of sexiness that can can only result in the types of feelings and situations that grown folks appreciate, anticipate, and instigate. And with twenty-five years worth of visual accompaniment to the music that has begotten many a romantic interlude, on this eve of aphrodisiac overload, we bring to you a short, entirely incomplete list of videos that stimulate us.

This clip definitely borders on cheese, but when has George Michael not been over-the-top? There's something overwhelmingly dirty and forbidden about the imagery here--shots of people rubbing their own bare skin, girl-on-girl action, the raunchy costumes--all wrapped up in a slick, special effects laden tour de force that visually holds up to this day. Will probably make you reconsider your aversion to leather and toys.

Faith Evans: "I Love You"
To me, Faith's clip for "I Love You" is akin to Janet's "Love Will Never Do (Without You)," in a way. There is that same kind of sexual self-discovery that is revealed to viewers in both videos. Aside from Faith looking absolutely stunning here, I think the video was beautifully shot. From the Asian motif, to the duality of temperature throughout the scenes, which reflect the yearning in the lyrics. Every time I see this video, I am always captured by how well the steaminess and snowiness contrast and complement each other. It literally can send a sizzling shiver down my spine.

Bilal:"Soul Sista"
You know how I do...don't think it needs an explanation coming from me.

Janet Jackson: "That's The Way Love Goes"
Curly haired boho Janet might be my favorite avatar of Ms. Jackson. And as a DJ, one of my personal goals is to assemble just the right combination of people, in the right space, and play the right tunes for a chill gathering of open-minded music lovers to naturally escalate into shared amorous explorations. I think that idea was first planted in my mind by this video.

TLC: "Red Light Special"
There are many elements of this video that ooze sexy: Boris Kodjoe in eyeliner and a boa, the masculine gear the three women don, guitarist's long hair and painted nails, foot kissing, finger sucking, the warm lighting...And the song itself was tailor made to exploit the sultriness T-Boz's husky voice.

With the video for "Fortunate," Maxwell turned the volume up on sexy. This was the Max that most of us fell for...hard. In all of his afro-wearing, biceps-showing, falsetto-singing glory. The video was a visual feast for the eyes. From the red nail polish flowing freely from the bottle to scenes of Maxwell and his female companion, we could assume what the pair did on that bed. And that's one of the sexiest things of all about this video, that so much was left up to the imagination. And whose imagination doesn't run a marathon when thinking about Maxwell?

Janet Jackson: "Anytime, Anyplace"
She hears his heavy boots walking down the hallway. His key is in the door. She watches. He feels her watching so he smirks, knowingly, at her closed door. He leaves his door open, the keys swing in the lock. Water boils. She tiptoes in. He's waiting. The sexiest of arrangements. The trust. Come in if you want. Eat these gotdamn strawberries. The washing machine. The bed. The chair. Up against the window. Kissing bellybuttons. Gyrating. Fingertips on backsides. Probably the sexiest green dress ever. Certainly the sexiest Janet Jackson. The one with the wild and tousled flaming red curls. Yes please. "Ohhhhh shit..."


TAGS:  bilal, faith evans, george michael, janet jackson, maxwell, tlc
Previous: Want To Know What Mixtapes We’re Listening To? Of Course You Do! Next: Morning Soul: Got No Time For Fake Ones