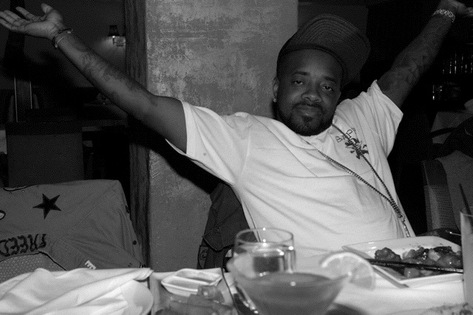 As you may know, super-producer Jermaine Dupri has stepped up his new media game over the couple of years. He has his own YouTube channel, as well as his own website, Global 14. YouTube is where JD regularly gets it in with his "Ocean's 5" crew: Usher, songwriters/producers Bryan-Michael Cox and Johnta Austin and Dupri's hilarious assistant Tyrone who rounds out the five.

In most of the videos, we get to see Jermaine Dupri in action at his studio in Atlanta, and it often makes for some funny viewing. It's nice to see these guys in their element, clowning around and even making music on occasion (Day26, Monica and Usher himself have all been in the studio recently working on tracks). The videos are a nice, informal view into Dupri's world. I was quite pleased to discover that Johnta Austin is very personable, and often steals the show with his way with words (blame it on the alcohol). As you could imagine, the shop talk can get a little blue, so be advised that you are heading into NSFW territory.