When Alice Russell Shows Up, She Shows Out 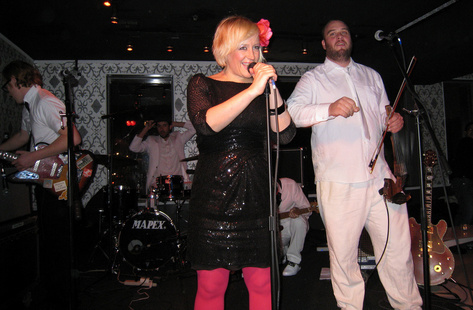 A few weeks ago we hipped you to the fact that Alice Russell would be touring the US during the month of March. Alice's tour is well underway after kicking off in Washington, DC at Liv last Thursday night and what a kick off it was. Backed by a tight group of musicians including producer/guitarist/singer TM Juke, fiddler/guitarist/singer Michael Simmonds, and two members of Bay area-based rhythm section The Park--Derek Taylor on drums and Josh Lippi on bass--Alice let everyone in attendance know that this wasn't a game. From the moment she hit the stage until the end of the second encore, Alice and the fellas went full throttle. But don't just take my word for it, check the visual and aural evidence after the bounce.

After that rousing start to the concert, it only got more intense as the night went on. Alice dug deep into her catalog of goodies to pull out songs from previous releases. From My Favourite Letters she performed "Mean To Me" and "Humankind," then tackled "Hold On Tight," a song she did with Quantic Soul Orchestra. After those throwbacks, Russell returned to her new material and threw down the gauntlet on this hand-clapping, foot-stomping version of "Living the Life of a Dreamer."

Alice continued with more hotness from Pot of Gold, including "Hesitate" and one of my favorite songs from the disc, "Let Us Be Loving," which she turned into a up-tempo number instead of the laid back funk found on the album version. She then segued into "Munkaroo," another gem from My Favourite Letters, and turned it out. Watch this performance all the way to the end. Just trust me on this one.

See what I mean? Alice is no joke on stage. She continued with more songs from the past covering "Hold It Down" and "Seven Nation Army" and led into current hits "Lights Went Out" and "Got the Hunger." The party train kept moving with her smoking rendition of "A Fly in the Hand."

She brought more tracks from the new disc alive, including "Turn and Run" and "Hurry On Now," and made her fans happy with another QSO cut "End of the Road." For her big finish, Alice brought the house down with a version of Gnarls Barkley's "Crazy" that would have made Cee-Lo proud. But thankfully she didn't stop there, coming out for an encore after the audience made the club shake with applause and screams for more. During her encore, she debuted a new song for us that had everyone shaking a tailfeather along with her. I have no idea where Alice and the rest of the band got all of this energy from at the end of the show, but they got quite crunk.

As much as the DC crowd didn't want to the show to stop, all good things had to come to an end. Only Alice and Michael remained on stage to close the show with a stripped down performance. Alice's voice filled the room over his guitar playing in what turned out to be the perfect end to an incredible night of music. It's the rare artist who sounds just as good if not better live than they do on their albums and puts on a good show to boot. Alice Russell is that artist. Make sure to catch her in concert when she hits your city.