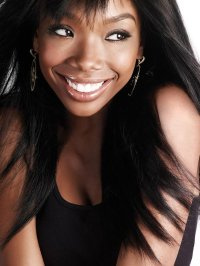 It's really good to see Brandy back in the public spotlight where she belongs, even though seeing her last week pimping for her brother giving lie detector tests to her brother's potential baby mamas girlfriends made my eyes bleed a little bit. That aside, I still love her music. A new track that didn't make the Human cut just surfaced this week and, the mid-tempo cut definitely stays true to Brandy's signature sound. The track, entitled "Love Me The Most," was produced by 22-year old Eric Hudson, who co-produced Kanye West's "Flashing Lights" and more recently produced the Jadakiss and Ne-Yo joint, "By My Side." His previous work with B-Rocka includes a track called "Dig This" from last year's Meet The Browns soundtrack. Check the track and see if you feel like I do: it's probably not the track I'll ever "love the most," and maybe one of the reasons it was left off of the album, but still...it's Brandy. So I like it.

Brandy: "Love Me The Most"