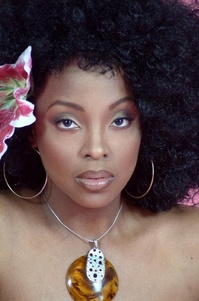 This weekend faithful fans of Conya Doss in the DC area will be able to see her alongside Sy Smith, Maya Azucena and YahZarah at the Soul Sista Serenade concerts coming to Rams Head On Stage and the Birchmere. It will be Doss' first time performing in months after an extended hospital stay caused her to rest and regroup. Indeed she is excited about returning to the stage as she is anticipating the positive energy that is prevalent in just about every show she has done.

"It's one of the things that excite me, especially the call and response from the audience," says Doss.

While followers of her rich and sensual voice laced with a honey-like melody can repeat a Conya Doss song word for word, there are still those who will find themselves lost as she is barely on the mainstream radar thereby depriving the average radio listener of a hidden gem.  However, the Cleveland native has managed to pave a way for her niche without compromising her art and who she is.

Though she has been singing since around the age of five, Doss didn't
introduce herself to the world until 2002 with her debut album Poem
About Ms. Doss
(Orpheus). Soon after she created follow ups: Just
Because
(Unique Beat) released in 2004 and Love Rain Down (Unique Beat)
released in 2006. Her fourth and latest album, Still (Conya Doss
Songs), was released in 2008 and features the Billboard chart hit "What
I'd Do."  Aside from recording and performing, Doss is a noted writer
who has penned songs for the late Gerald Levert, the female trio 3LW,
gospel sensation PAJAM and a host of other artists.

Doss, who was politically active for six years with the now defunctOhio-based organization People for Better Government, did not have to
think twice about taking part of history as she recorded
the song "Obama for Change." More recently she has worked with soulful
singer Dwele as the two collaborated to promote the McCafé, the newest
ice coffee beverage from McDonald's.

Critics familiar with her work have praised her staying power as an
independent artist, especially considering she has a do-it-yourself
work ethic.

"It's very important to understand the business side to the industry. I
make sure I am there to sign off on every thing from contracts to
checks. My integrity is also important, so I have creative control.
There is a definite benefit to being an independent artist. It gives
you a peace of mind as you are not rushed on projects and it keeps you
grounded," says Doss.

Her strong work ethic spills outside of music as she is a language arts
and math teacher for students with special needs. With her students
within the age range of 12 to 15, she has maintained a balancing act
between teaching and creating music. Doss has been fortunate enough to
perform or work on music anytime there is a break in the school year.
However, music just may intertwine with her normal work day.

"My typical day starts at 5:30 in the morning. On the way to work I may
write a little verse. If I have a break in the day or later on I may
record something on my portable recording device. I'm in bed by 8:30 in
the evening if I am not performing. The key for me is strategizing. I
have to watch how much work I bring home. After all I still have lesson
plans to do and papers to grade," says Doss.

If there is ever a time when Doss felt like leaving teaching to do
music full time, she will most likely chalk it up to be just a day
dealing with challenges.

"Yes, there are days when it's hard, but I do believe a person can have
more than one calling in their life. It's about finding a balance,"
says Doss.

Despite the demonstration and evidence of her strong work ethics, the
ever humble Doss is quick to say that her staying power as an artist is
not all her. She credits "the creator" [God] and people who ultimately
believe in her and her artistry.

With her appearance giving off a "natural sista" glow and her romantic
and life conscious lyrics, Doss is labeled as a neo-soul artist.
However, the reality is, she just considers herself as an artist.

"Music is from the soul. I write about my experiences and even the
experiences of others close to me. It's all from my soul. Anything can
be soul music, even country. There is nothing new about soul music,
it's just plain soul," says Doss.

She further explains, "With artists like Dwele, YahZarah, Eric
Roberson...all of us considered to be neo-soul artists, I hope eventually
the name will go away and it can be like back in the day where soul
music is just considered soul."

In staying true to herself, Conya Doss has no regrets in being an
independent artist. She has long let go of worrying about if others
will like what she produces and realizes the masses will only
appreciate you if you are only being yourself.

But I'm not going to compromise this precious gift I've been given
See myself through others eyes
Instead of mine, just ain't living
Raise me with the finest things that are found in dreams
But it wouldn't mean a thing/Take me as I am.