Looking Back On The Original Bad Girls 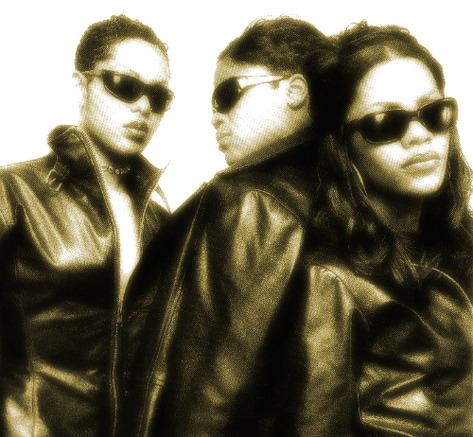 It goes without saying that my favorite girl group of all time is Total, and after stanning for them for a solid 14 years, I cannot begin to tell you why. That isn't to say they weren't dope, but if this group came out today, amid most of the garbage I so easily dismiss or bag on, then you wouldn't see them mentioned here other than to facilitate a punchline. But there was something so fresh about them when they dropped back then. They possessed a blend of elements that no group before or since has managed to capture, all without the presence of any tremendous vocal dexterity.

Sex appeal & style: Total's brand of sex appeal differed from other groups since they didn't seem to be going out of their way to be ladylike but stopped short of being complete tramps. They could be very direct in their lyrics, but in their videos, they were almost always completely covered up. Not to mention, they had the best stylist in the business at the time, Sybil Pennix, who was able to capture the kind of Hip Hop cool cultivated by Jodeci and apply it to a group of females. Perhaps one of the sexiest, coolest songs of theirs to embody this aesthetic was "Do You Think About Us," produced by Raphael Saadiq.
"Do You Think About Us"

Sexual ambiguity: You would never catch En Vogue slapping each other's behinds in a video, but Total had no such qualms. To their credit, when people made assumptions about their private proclivities, they took it and ran with it. In "Rock Track," Pam has no problem welcoming a female party to a hookup. (Not for nothing, but this song started off as a St. Ides radio ad.)

"Rock Track"
Fat beats: Total was fortunate to work with some of the best producers in the industry at the time. Aside from your Bad Boy regulars like Stevie J and Chucky Thompson, they also employed the services of Raphael Saadiq, Timbaland, Rodney Jerkins and The Neptunes. A lot of folks don't realize a pre-"Superthug" Chad and Pharrell contributed a song to their debut called "When Boy Meets Girl," on which 112 does a masterful job of invoking the Bee Gees.
"When Boy Meets Girl"

Golden Age Bad Boy: It goes without question that the main thing that will always set Total apart is that they benefited from being a part of the early Bad Boy era. During this time, Puffy was cultivating a specific sound with his R&B output ("Hip Hop Soul") and no group since (Dream nor Danity Kane) can boast this. Total was an integral part of the "Bad Boy Sound," since their vocals (namely Pam's) can be heard on lead singles from both Biggie albums ("Juicy," "Hypnotize), they share three songs with Mase ("What You Want," "If You Want Me," "Stay Out My Way") and provide guests vocals on tracks produced in conjunction with Bad Boy ("Dolly Baby" by Lil' Cease, "Do You See" by Sauce Money).
The fact they didn't make it past two albums with the label is sobering (though not surprising), and one of my favorite videos of theirs was the remix to "Kissing You," in which the Bad Boy family really looked like a family. Biggie, Craig Mack and a bunch of Puffy-like kids made cameos. Can you imagine a "Bad Boy Family BBQ" happening today? Probably not without someone being forced to walk across the Brooklyn Bridge for dessert.
"Kissin' You / Oh Honey"


TAGS:  audio, bad boy, total
Previous: Celebrate The Possibility Of An Emmy For Jill Scott Next: ‘Unsung’ Gives Shalamar A ‘Second Time Around’