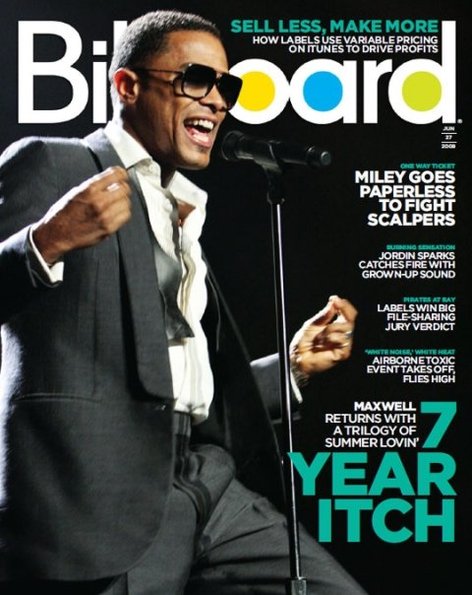 Gasp. Swoon. Rinse. Repeat. Maxwell, in all of his glorious glory, covers the June 27th edition of Billboard magazine as his long-awaited return BLACKsummers'night hits stores in a couple weeks. Between the action shot of Max channeling Smokey, Sam, Marvin and Teddy on stage to the tantalizing headline on the cover, there is so much win to be had here. The interview, conducted by Mariel Concepcion, promises to be a revealing look at the once-guarded soul singer. Check out some choice quotes from the feature after the bounce and pick up your copy of Maxwell on Billboard before they sell out. Good looking out to Lex at STR8NYC for the heads up on this.

Maxwell on what took him so long to get back in the game:

"Up to that point I'd been on the road and didn't have a chance to really live. But I write about real life experiences, so it just felt like I had to sit back and let these experiences happen and inspire me all over again."

"People ask, 'Why so long?' and I say, 'It's easier to take something that's of the moment, but so much harder to say something
that will resonate today, tomorrow and for all times.' I want my music to last forever. I never want my music to be dated."

"I met this girl who I still respect very much, and although it didn't work out, I got lots of inspiration from it. This track speaks of my time with her."

Maxwell on the anxiety behind his 2008 comeback tour:

"I'm not going to bullshit you--I was scared. You never know how people will feel. And if only 10 people would've been interested, I would've been disappointed, but I wouldn't have been surprised," he says of touring last year. "It was such a validation and proved to me that my work in the past was worth something. I can't tell you how validating it is for me to be able to say that I was gone for seven years but I was never gone in people's minds and hearts."

Maxwell on the BLACKsummers'night thrillogy:

" 'BLACK' is darker. It has a bluesier side and features more despondent records. It speaks plenty to love lost." BlackSUMMER'Snight,"
the second installment of the trilogy to be released in 2010, has more of a gospel feel. "It's lighter. It's gospel music for the common person that wouldn't naturally get involved with that type of music. Hopefully they'll get down with it now," he says. And, finally, "Blacksummer'sNIGHT," the third set with an anticipated 2011 release, is "straight-up slow jam records."