What Can We Expect From The New Mariah Carey Album? 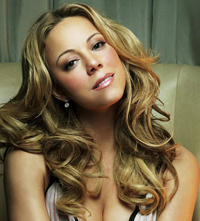 We are so conflicted about Mariah Carey, but one thing we're certain of is that she's simply bursting with amusing blog fodder. The first single from the forthcoming Memoirs Of An Imperfect Angel is entitled "Obsessed" and is due to hit radio next Tuesday. The  most interesting tidbit to come about regarding MOAIA is that Mariah promises to deliver an album in the vein of Butterfly, which is easily one of her best. But then her collaborator The-Dream completely ruins it with this revelation:

". . . she just released a fire record in the building today. And we have been blasting it out all day. It's just f*cking retarded. I don't think anybody is going to expect her to come out punching like she is going to come out. But she got a record. It's going to light the blogs up too because you don't know who she talking about, what she talking about, but she talking about something. And remember The-Dream told you first. So you can start that up right now. Mariah Carey has a record, and somebody's going to be very upset. I said that."

If there's one thing we absolutely loved about Butterfly, it was the passive-aggressive responses to "haters". Oh wait, Butterfly didn't have any of that! So what could young Terious be talking about? HHDX suggests the target is Eminem who, even with Sacha Baron Cohen's package in his face, still manages to ruffle a few feathers. And is it possible that this fiery, upsetting, effing retarded record that will light up the blogs is "Obsessed"? We have a few more days to find out. On the upside, Mariah is working with Walter Afanasieff, who co-wrote some of her strongest ballads and hasn't been seen with Mariah since Glitter.

Memoirs Of An Imperfect Angel is due this September.