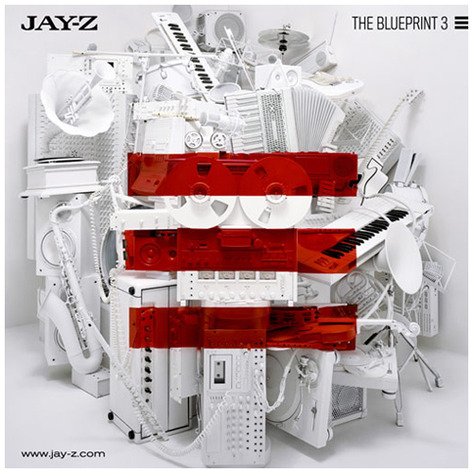 Jay-Z's Blueprint 3 drops today in an attempt to curb the numerous "leaks" that have been dripped all over the internet in recent months. In fact, I'm willing to bet that many of you reading this right now have already heard this album and formulated your own opinion. Below are some reviews from popular music outlets. After the bounce, you can see mine.

Somebody fetch Jay-Z some smelling salts, a Starbucks gift card, a midlife crisis -- anything to knock him out of the stupor he has settled into on "The Blueprint 3."

At its core, the album is less about introducing newfound skills or subject matters than it is a platform for Jay-Z to showcase his imperious flow, to reassert his world-conquering ego, to remind everyone just who the heck he is..."The Blueprint 3" aims to show everyone he still has wicked skills on the mike. It does, even as it illustrates that sometimes he coasts on his celebrity.

Overall, it's a state-of-the-art performance by arguably the greatest to ever speak ghetto poems over music. Then why does it feel like something's missing?

Even if it lacks the raw power of his earlier work, the album succeeds at its larger goal -- reaching maximum commercial blast radius while maintaining its street bona fides.

Sorry, young rappers, Jay-Z's whole "Blueprint" thing was a trick. These albums don't show a path to success. They show how Jay succeeds, why he cannot be duplicated. And "The Blueprint 3" is the most untouchable of them all.

He carries on as if his every artistic decision is a manifesto that'll have a crucial, altering impact on our daily lives. And he parses his lyrics as if they're texts that'll be pored over one day like the Dead Sea Scrolls.

Personally, I can sum up how I feel about Blueprint 3 with one sentence: Just go buy Raekwon's Only Built 4 Cuban Links 2 instead.


TAGS:  jay-z, raekwon
Previous: How Priscilla Renea Got Soul-ed Out Right Before Our Eyes Next: Bounce-Worthy: Quadron