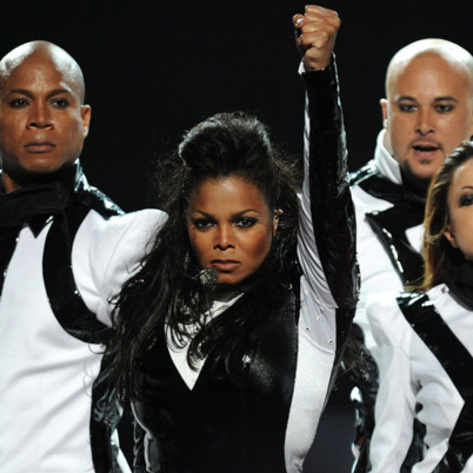 No, your sleepy eyes do not deceive you, this is a special after hours post to shine the spotlight on Janet Jackson, who has already made my week and it has barely started. Not only did she pay tribute to her brother Michael in one of the more exciting performances on Sunday night's dismal MTV Video Music Awards (video after the bounce), but she surprised her fans with a very special gift on her website--a certified banger of a new song! Janet channels her old Miss Jackson If You're Nasty self on "Make Me." This is kind of song we have been waiting for from Jan--a fresh-sounding throwback that you can throw down to on the dance floor. The lyrics are flirty and fun, and she shows more love to Michael on the chorus with a wink and nod to "Don't Stop Til You Get Enough." This song is everything right now.