‘Memoirs Of An Imperfect’ Album 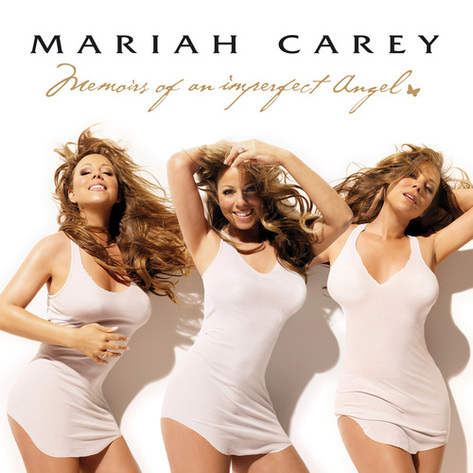 This week Mariah Carey will release her latest effort Memoirs of an Imperfect Angel. This album marks her twelfth studio release and her first time working without Jermaine Dupri since they started collaborating. This album is primarily produced by The-Dream and Tricky Stewart as well as a few tracks by Big Jim Wright, most known for working alongside Jimmy Jam and Terry Lewis.

Memoirs is an introspective look at the stages of love. For the first time in a long time, her album features very few uptempo songs and no features. The album has more of a laid back R&B feel with Hip Hop-infused tracks. This album is about heartbreak, about your first time falling in love, getting the strength to leave and enjoying the fact that you are in love.

"H.A.T.E.U." is vocally one of her best songs.
She sounds amazing and the song is a true R&B ballad. She uses her
upper register in this song as part of the melody of the chorus,
instead of in the background in ad libs as she has done in the past.

"Impossible"
is one of Mariah's sexiest and honest songs that she has done to date.
Perhaps the only song that discusses her current relationship, she
sings "you did the impossible, you rescued my love, you did the
impossible, see I had almost given up." This song and its reprise give
us a glimpse of just how much she loves Nick.


"It's A
Wrap" is perhaps one of the most amazing tracks on the album. It has a
throwback, Do Wop feel that really focuses on Mariah's vocals. It
reminds me of the Mariah we might have heard during the Daydream era. She doesn't cheat and whisper-sing. She owns this track, and the lyrics are of the caliber we expect of her.

Mariah Carey: "It's A Wrap"


"Up Out My Face" is a fun, mid-tempo song that reminds me of "Shake It
Off." In it she chunks up the deuce to an old boyfriend, reminding him,
"When I break, I break, up out my face, boy." The reprise of this song
features a marching band playing the instrumental of the song, which
will surely get burn in many a college dorm across the country.

However, as the title of this review suggests, this album is plagued with imperfections.

The
majority of the songs are rather boring love songs. Most of the songs
seem like filler and fail to excite. We expect great songs and lyrics
from Mariah and the writing on this album seems very elementary and
just plain silly.

Songs like "Candy Bling," which feature an interpolation of Ahmad's
"Back In The Day," sounds like the typical Dream song. She tries to
convince us that this "feels like real love, not just play play." Like
her movie Glitter, we just don't buy it. The first single
"Obsessed," which comes near the beginning of the set, sticks out like
a sore thumb given its sound and trite subject matter. Her rendition of
"I Wanna Know What Love Is" does not live up to the original nor does
it live it up to other covers she has done in the past. "More Than Just
Friends," which contains a subtle interpolation of Notorious B.I.G.'s  "One More Chance (Remix)" fails to move or inspire.


Mariah claims she wanted to work with different producers to avoid
having a sound that is "stale or redundant," but at times this album
sounds like just that. Memoirs of an Imperfect Angel doesn't sound like the work of a 12-album veteran but rather an album that could have been sung by the likes of Leona Lewis or Jordin Sparks.

This
album leaves one wondering why we are so obsessed with Mariah. It
appears as though she's only interested in remaining relevant rather
than making music that is on par with women of her success and talent.
I do feel like her partnership with The-Dream for the bulk of this
album was a fail and that she should have switched it up more. Mariah
may have had good intentions with Memoirs, but they didn't come out in the execution.