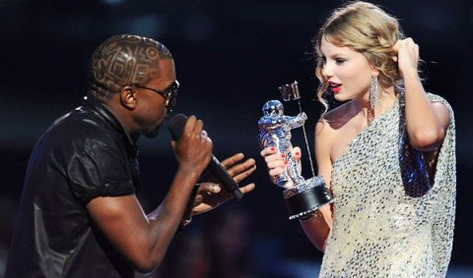 This was just a bad weekend for Black people. From Kid Cudi's skinny jeans during Friday night's benefit concert at the Garden to Serena Williams' profanity-laced offer to become the linesjudge's ear, nose and throat doctor to Evander Holyfield's embarrassing Taco Bell commercial to last night, when both Kanye West and Lil Mama became trending topics on Twitter for all the wrong reasons, it was a rough 72 hours. Last night may have been the worst, though, as Kanye West did what he does best at the MTV Video Music Awards, going off because of what he felt was an injustice to a Beyonce video. Some would say that since it happened so soon after Janet Jackson's touching tribute to Michael, that it marred the sentiment that started the show. I say that because it happened period, Black people may not be invited back to the ceremony.

Seriously, MTV may just adpot the same stance as the Grammys and decide
to give out "certain" awards before the show airs. Add to that the
embarrassing display by the diminutive America's Best Dance Crew judge during the rousing, inspirational finale as Jay-Z and Alicia Keys
performed the new NYC anthem "Empire State of Mind," and they may ban
us from the network altogether. Think about it.All they really have to
do is send Diddy's stable of shows to *gulp* BET, and they'd be done with us as a people. Which would lead many, including myself, to scream: "Kanye West does not care about black people." (Not really, but it was a bad look.) If you haven't seen them already, the offensive acts are below. Insanity rules. iSigh.