Well, after last week's less than inspiring appearance on Good Morning America, I'm sure I'm not alone in thinking that we needed something, anything from Whitney Houston that we could cheer about. We wanted to be able to raise our heads from our constant prayer for her voice to return to what it once was. With the release of the first official video for "I Look To You" from the album of the same name, we just might have something to smile about. Whitney, as she has in other recent appearances, looks absolutely great (save for a subtle facial twitch that is definitely worth keeping an eye on), with the visuals of her in a state of bliss (however manufactured) being the spoonful of sugar that helps us digest the medicinal reality of her voice's current state. This was definitely what I needed in order to perk up from this solemn day and let the weekend officially begin. Thanks, Whitney. [H/T: TIRM]


TAGS:  whitney houston
Previous: Nine Reasons To Watch Tonight’s Jay-Z Benefit Concert on FUSE Next: Janet Jackson’s ‘Make Me’ Is What We’ve Been Waiting For 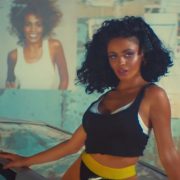