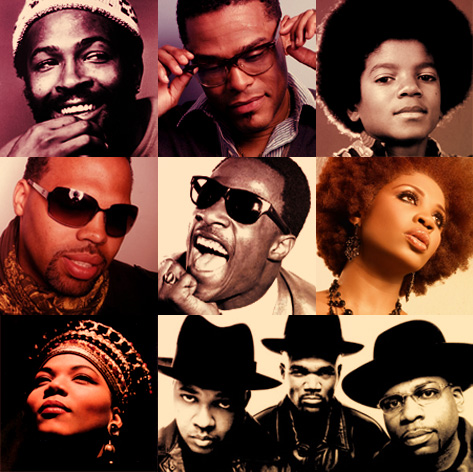 Do you remember the good old days of music? Depending on your age, that era may vary. My parents nurtured my young ears with the sounds of Marvin Gaye, Stevie Wonder and Diana Ross. In the '80s, I walked the streets of Gary, Indiana wearing a "Beat It" jacket with Run-DMC blaring through my cassette walkman that looked more like a VCR. Being raised on Motown and Stax recordings while witnessing the birth of Hip Hop made it an amazing time to develop musical tastes. Music videos took the audible experience to another level as the soundtrack of a new generation was taking a magnificent form. These were the good old days.
Center

By the early '90s, music upgraded from cassettes to CDs and the soul greats of the '60s and '70s laid the foundation for the golden era of Hip Hop and R&B. My first CD purchases were Boyz II Men's CooleyHighHarmony and A Tribe Called Quest's Low End Theory. The days were still good. As the decade progressed, the conscious messages and self-empowerment themes in music became harder to discover. Somewhere between "Fight the Power" and "Thong Song," mainstream music outlets became enamored with the mindless, escapism in lieu of passionate expression.

This infatuation with manufactured marketing campaigns disguised as popular music ran parallel with increased accessibility for anyone with a computer and a microphone to create music. We entered the 21st century with the internet in one hand and acceptance of mediocrity in the other. The good old days of music weren't looking so good and a lot of us found ourselves lamenting over the current state of music and whining about the good old days like we're sitting outside of a nursing home. What we sometimes fail to realize is that a new generation of incredibly talented artists have incubated their skills in the warmth of mainstream's hot mess.

Welcome to the good new days.

While mainstream maintains its perception to chase the bottom line at the expense of true artistry, independent artists are creating phenomenal music and sharing it with the masses. In the midst of an economic recession, people are spending their hard-earned dollars to attend shows, buy CDs and spread the word about musicians that may not get the MTV or VH1 airtime they deserve. We were blessed to have Otis Redding, Michael Jackson, Queen Latifah, Phyllis Hyman, Public Enemy, Digable Planets and De La Soul playing alongside our youth. But let's not forget that our children have Eric Roberson, Sy Smith, Jill Scott, The Foreign Exchange, Joy Jones and N'dambi to navigate their ears through a world that is more complicated than what it was 10-15 years ago. The difference is that we can't rely on mainstream to expose them to these artists...yet.

This is not to compare current soul and Hip Hop artist to the majestic, great ones of yesteryear. It's not about a comparison, but a continuation of what our predecessors started. It's easy to complain about how the good old days have seemed to fade. We must occasionally turn off our radios, stop tweeting and put Farmville / YoVille / Mafia Wars on pause--and use that tremendous information tool (aka the Internet) to uncover the good new days of contemporary musicians and singers.

If you're reading this, you're on a beautiful path to good new days. It is our pleasure to shine light on the abundance of artists who serve the soundtrack of a new generation with more creativity, distribution tools and organic execution than ever before.

Yes, a lot of music sucks nowadays and it is being shoved down our proverbial throats on a regular. Yes, it can make you crave the nostalgic genius of our beloved genres. By all means, crack open the Isaac Hayes box set or do the "Humpty Dance" when you feel the urge. Please remember that we are not in short supply of fantastic music being created and shared right now. Celebrate the good old days, but don't forget the good new days are in our midst as well.