‘Dreamgirls’ Will Never Leave You And Has Started Its National Tour 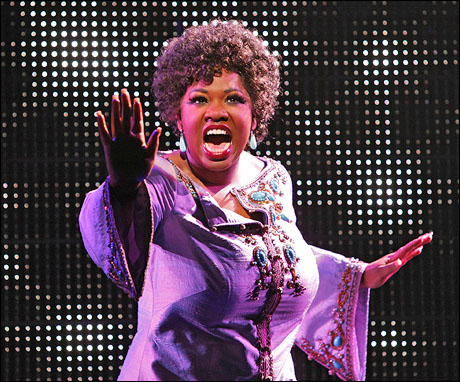 After an exhaustive, national audition process that took nearly a year to complete, the national tour of Dreamgirls has begun. Although methinks some theaters in Detroit could've used the revenue, it fittingly reopened at the world-renowned Apollo Theatre in Harlem this week to much fanfare. Starring virtual unknowns as leads (there are a few exceptions including Chester Gregory, Chaz Lamar Shepherd and Syesha Mercado, who was a runner-up on American Idol) the story is a familiar one. Though it's been a few years now since the Oscar-winning performance Jennifer Hudson gave as Effie (seen above as portrayed by Moya Angela on stage) took the non-musical theatre going world by storm, this remount will probably be successful. Everyone's looking for some uplift around this time of year. Visit the website to see if the show is coming to a city near you! [H/T: PB]
Center