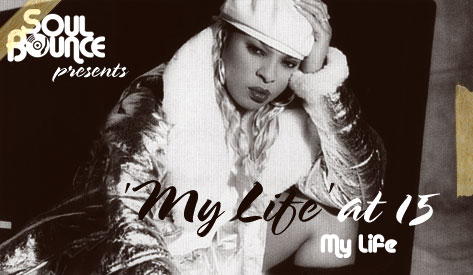 "Life can be only what you make it / When you're feeling down, you should never fake it"

So begins the haunting title track from the My Life album, arguably one of the most beloved songs Mary J. Blige has ever recorded. Like most of the songs on the album, it was produced by Puffy and Chucky Thompson and also included background vocals from a then unknown Faith Evans. Considering the relatively chipper jazz song it samples--"Everybody Loves the Sunshine" by jazz great Roy Ayers--"My Life" is heavy with woeful introspection and almost serves as an anthem of sorts for anybody, any woman in particular, who has ever felt beaten by life's sometimes cruel hand, by heartbreak, by longing. It's an ode to spiritual strength through sadness, as well, with lines like "You won't really need no one else except for the man above because he will give you love" and "I know it is hard, but we will get far. And if you don't believe in me, just believe in 'he'." It's instruction.

It's no secret Mary's young life was tumultuous--an abusive relationship with K-Ci, drug and alcohol addiction, clinical depression--so when she assures "I know that things will turn out fine" you get the feeling she's trying to convince herself as much as anyone listening. Mary's career was quite transparently built on her struggle, pain, and personal demons, and "My Life" represents the epitome of her weary resilience. To this day I can't listen to it without tears pooling in my eyes. And not just because her distinctively raw wail aches with emotion and melancholy. I, like many others, just simply relate. The first time I heard "My Life" I was a freshman at Howard University suffering the dissolution of my own first love and my own anxiety over the circumstances of my young life thus far. I felt like "My Life" was both for me and about me. That's always been what made Mary J. Blige special above all else--her relatedness. Her homegirlishness. Shero to the downtrodden. And even now, older than Mary was herself when she first recorded it, this song still feels like a letter from a big sister.