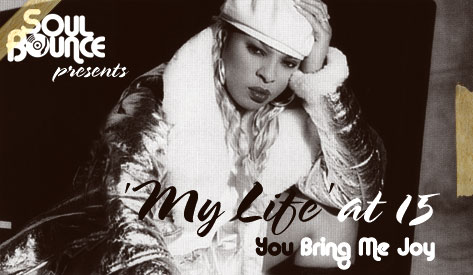 Barry White's "It's Ecstasy When You Lay Down Next To Me," laid the foundation, but "You Bring Me Joy" was the house that Mary J. Blige built. As the second track and fourth single from My Life, this was a song that had "hit" written all over it. The sample was a stroke of genius underneath Mary's heartfelt harmonies wrapped around lovelorn lyrics. In "You Bring Me Joy" she tries to convince her man that her love is for real, as if there
was any question after listening to this track. It's almost as if Mary was the one pursuing instead of the one being pursued. This no doubt spoke volumes to where she was in her life at the time and to the love that she wasn't getting but wanted oh so badly. On top of all that, the song had the nerve to be a club banger. When this joint came on back in the day you couldn't not move and may have even found yourself recreating the dance moves from the video (after the bounce). This song was sheer Hip Hop Soul perfection.


TAGS:  audio, barry white, mary j. blige
Previous: Get Your Drink And Fly Gypsy Got Your ‘2 Step’ Next: Forget About Insurance. Stereomood Has Got You Covered.