SoulBounce Honors 2009’s Group Of The Year: The Roots 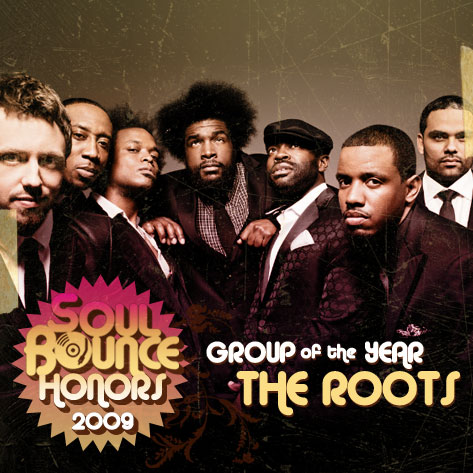 They proceed out on stage, tuba first. Followed closely by the two keyboard players, and the man on the guitar, and the bass player. Then along comes the MC, and finally, the leader. The percussionist. The man with the plan. All of them in step. Precise. Prepared. In sync. The funky drummer counts it out, puts his sticks together in rapid succession. And just like that, it's showtime.

It happens like that seemingly every night of the year. Different venues. Same results. The hardest working band in show business is in your area. The Roots are in the building. And whether they were playing walk-ons for Penny Marshall, or backing up Marsha Ambrosius, this year The Roots were everywhere. All the time. Working.

And that makes them SoulBounce's 2009 Group of The Year.
Center

It's an arduous schedule, to be sure, but nothing new for the Philly collective, who routinely travel around the world each year, letting folks know what they're all about. Except now, they're relegated to the States, and their commute is mostly the same 100 miles, back and forth from Philly to NYC about 200 times a year. Now, they're backing an unfunny mildly funny comedian named Jimmy Fallon, who's trying to make his mark on late night television with Late Night With Jimmy Fallon.

Whether it's Black Thought and Tuba Gooding, Jr. exercising their acting chops during skits, or ?uestlove and James Poyser putting together songs on the fly during bits--or just Captain Kirk's facial expressions that are routinely caught by the cameras--the Roots are doing it all. And stealing the show in the process.
It's true. Most people wouldn't watch if it weren't for the band, who have backed everyone from Mighty Mos Def to the Mighty, Mighty Bosstones since the show debuted in March.

And if you think this gig has stopped their touring, think again. It was during their premiere week on Fallon that they began a weekly residency at New York's Highline Ballroom, appropriately called "The Jam," where they would literally perform into the wee hours of the morning along with special guests to standing room only crowds.

Add to that their commitment to their hometown, where ?uestlove regularly DJ's on the weekends during the summer, and their role as co-curators along with Common on the successful fall Hennessy Artistry Tour that hit cities like Houston, Chicago and Atlanta, and really, if you haven't seen a Roots show this year, you're clearly living under a rock. Oh, and did we mention that they're also putting together their ninth studio album? Yup, with the first single, "How I Got Over"--video included--released over the summer.

Sure it's a lot, but they've proven they can handle it. And that they love it. And that's why we love them. They're not afraid to shake it up. Take chances. Do things differently. While never sacrificing the quality of their performance. Expect more from the group as Year 2 of Late Night begins in a few months, and keep on the lookout for when they'll be in your town.
Whatever you do, don't sleep on The Roots, because they surely aren't sleeping much. If at all. Clearly, this is their time.

Get in step. Let's start the show.