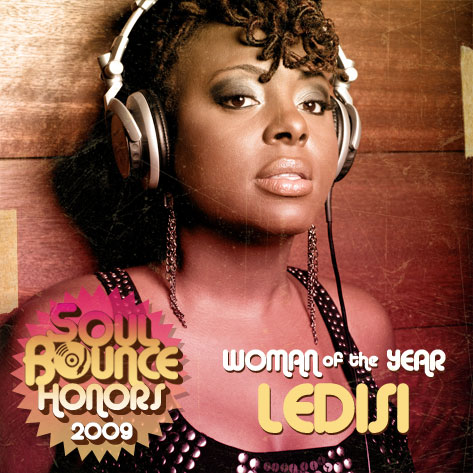 After yesterday's bittersweet opener about the King of Pop, it's time to swing the pendulum of 2009 to the other extreme. After a tumultuous year that has rounded out this decade in music with more of a thud than a bang, it's important to note that when things went well, they really went well. For our Woman of the Year we chose a case in point and one of the truly exemplary contributions to contemporary soul music: Ledisi.
Center

After keeping listeners in suspense for the better part of the year, Ledisi burst back onto the scene two years after the release of her critically acclaimed third studio album Lost and Found, which unleashed her magnificent, jazzy voice to a more mainstream audience. Following up that album must have been a daunting task. The recurring question of how to follow up and reinvent yourself as a singer and artist is one that has claimed the careers of many lesser performers. For Ledisi, it proved inspirational.

Having spent years crafting excellent music, she's gained a comfort in her own talent to explore a more cross-generational sound that skillfully bounces between genres. This process brought her to Turn Me Loose, released earlier this year. Committed and nuanced, it provided two of the most consistently great singles of the year: "Goin' Thru Changes" and "Higher Than This."
She looks great, sounds even better and the growth she's undergone saturates the numerous concerts at which she's wowed audiences and makes each song on Turn Me Loose relatable and enjoyable to a range of listeners. It's translated into multiple award nominations and a new level of critical and popular praise. This year was the when Ledisi became a genuine soul powerhouse.
In an interview with SoulBounce just after her album released, Ledisi said that she was really feeling herself this time around. We would be remiss to recognize how much we appreciate her, too. From her fantastic album cover, to her beautiful music video, to her effervescent performances and several of the most wholly satisfying albums of the decade, 2009 was Ledisi's year. And we thank her for allowing us to take part.