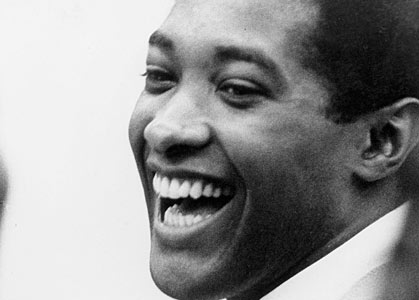 To say that Sam Cooke died at the height of his career would be a gross understatement. Gunned down at 33 inside the Hacienda Motel in Los Angeles on December 11, 1964, in what was determined to be a justifiable homicide, the man who once told Dick Clark that he transitioned from gospel to popular music because of his economic situation was gone too soon. After a glorious run of hits that spanned eight years and produced 29 Top 40 hits, including "You Send Me," "Chain Gang," and "Cupid," Cooke was just reaching his apex.

He was just about to soar.
Center

He came up during the Civil Rights era, which put that much more force behind his music. Gave it that much more societal weight. He was an entrepreneur, composing his own material while founding both a record label and publishing company.

Tonight, PBS and its American Masters series (Sam Cooke: Crossing Over, 10pm EST), takes an hour-long look at Cooke and his legacy, focusing on his contributions to the nation on the verge of change. And while sadly, Cooke wasn't around to see that change, his song "A Change Is Gonna Come" served posthumously as a rallying cry for those in the struggle. For those looking for change. His voice led the charge.

Which is where the special should've stayed focused--on his golden voice. Because really, that's what he was all about. After marriages and a divorce and the tragedy of losing his infant son, the thing that remained constant about the man was his music. And how it affected people. He was a legend in the making, cut short before his star could fully shine.

Narrated by Danny Glover, Crossing Over took over 12 years to make, due to heavy and steady objection from Cooke's former manager, Allen Klein. In fact, in a touch of irony, because of the delays, most of the folks interviewed--including both James Brown and Lou Rawls--passed away. It's a sentimental piece, to be sure. And while it may not be the ultimate biography, it's still an hour that gives us some insight into the man that left us way too soon, just before he could soar.

It's an hour that was a long time coming.