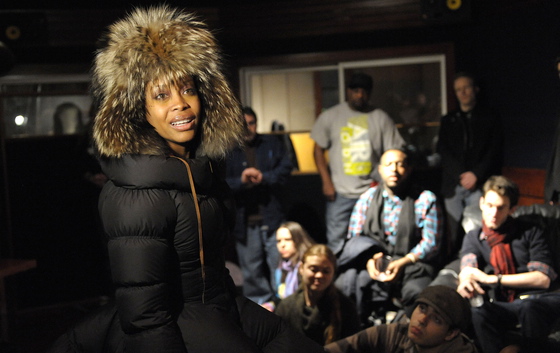 I don't pretend to understand everything that Erykah Badu does. I just know that for my trust in her vision, I am always rewarded, often much more than I ever expected. So when "Jump Up In The Air and Stay There" was leaked at the listening session for New Amerykah Part Two: Return of the Ankh, I was skeptical, but intrigued nonetheless. After listening to it repeatedly over the past weekend, I actually really like it. Erykah's eclectic, Southern wiles are the perfect lightning rod for which to bring this melange together. Does a track with her, Bilal, and Lil Wayne really work? Yes, it really does. Especially since I distinctly remember a time when Wayne wasn't so grating to my nerves. Do yourself a favor and trust Erykah. Or don't. Because as she eloquently says "I don't give a f**k." She'll bring the funk anyway. [H/T: PBB]
Center