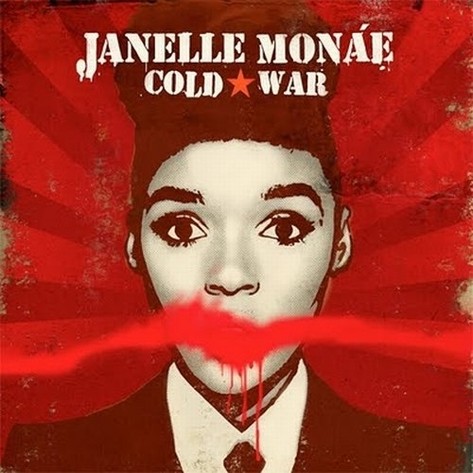 Expanding the musical vein she introduced us to in her previous disc, Metropolis, Janelle Monáe released two new singles last week, the second of which, "Cold War," is another aural treat for her steadfast fans. New listeners to her sound will be just as amazed at how infectious the track is with its percolating drums, electric guitar, harmonic vocal overlays and her perfect vocals modulating between soulful inquisitive innocence and edgy afro-punk staccato. This song is just as on point as "Tightrope" with Outkast's Big Boi, which we previously rocked out to. Monáe has cornered the musical market with her own style that has no predecessors. With her poofed faux-hawk, saddle shoes and high water pants, she has created a look and sound that is branded by an unmistakable new age twist--fusing technology and soul into an exhilarating experience. Janelle Monáe's artistry is inherent in her every pore and she artfully avoids being a caricature with her advanced musical arrangements and demonstrated musicianship. My fingers are crossed in hope that what we've heard thus far are not the only winners on her upcoming album, The ArchAndroid, which I pray is much longer than the woefully short Metropolis.
[H/T: OKP]
Center