Arresting Badu Would Prove Her Point 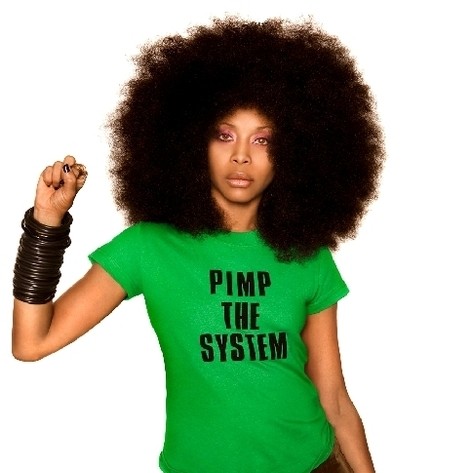 How ironic that yesterday as we were winding down "Du Day Part Deux," blogs were ablaze with word that Erykah Badu may be arrested for her "Window Seat" video if at least one person who witnessed her midday public striptease was willing to step forward as a witness. If you haven't seen the video by now, then you did not witness Badu stripping to her birthday suit admidst a crowd of onlookers, which included children. Badu infers that her video is artistic commentary about groupthink, human behavior that she describes as an "unwritten rule that I will not express my true opinion if it opposes those I love and fear." While Ms. Badu is definitely bringing the term to the masses, she did not make it up. Journalist William H. Whyte coined the term in 1952, in Fortune magazine and it was later used to describe the tendency found within political and work place groups to come to a consensus even if all parties do not agree. However, authorities in Texas could really care less about all of that. They are investigating whether to charge Badu with indecent exposure and other violations, including filming without a permit.

The irony abounds. While Badu's video is garnering a record number of
viral hits and a few copycat versions
(think about the online popularity of Beyoncé's "Single Ladies" and subsequent homemade remakes), the fact that her video has drawn
the ire of the law and anger from folks who say that her message should
have been conveyed without the nudity is proving her point to the hilt.
This trend of groupthink has already begun to rear its head, if you buy
into Badu's description of the term. On popular online blogs,
commenters are describing Badu as everything, from a "PR genius" to a
sad "product of mental illness." Here's my question, though, why didn't Matt
and Kim, the Punk Rock duo who inspired Badu's vid, cause this
much hype and reaction from listeners and the law? If you haven't seen
their vid yet, check it out below and share your feedback.