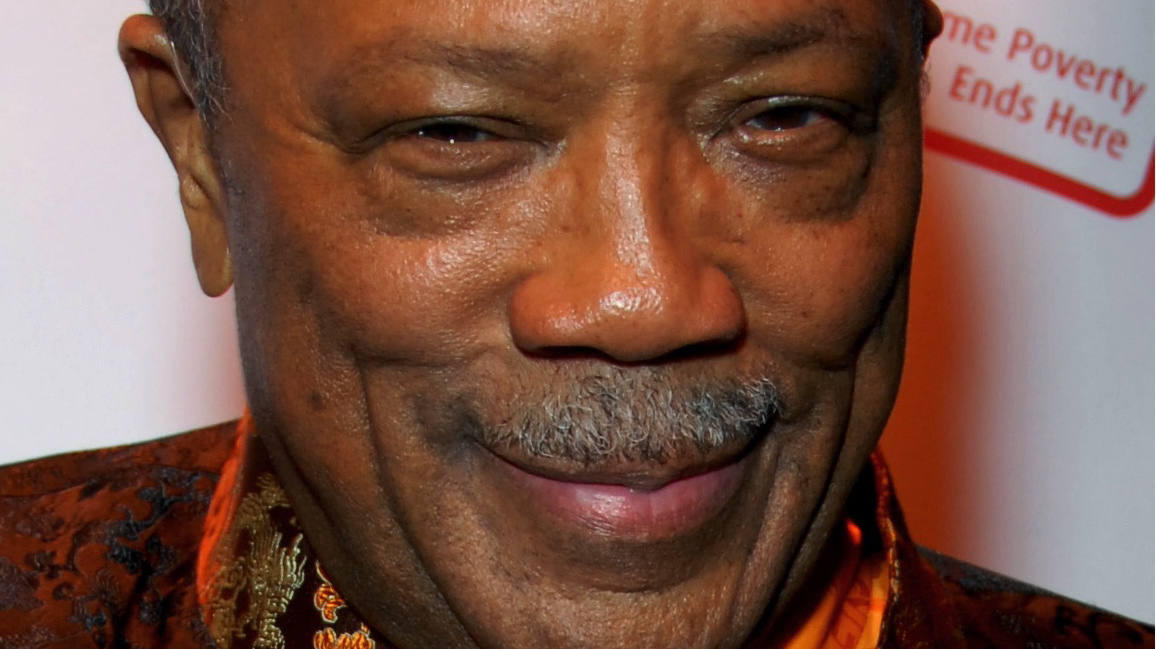 That benevolent smile so eagerly waiting to curl into a snarl. I see you, Quincy, and I am onto you. For the rest of you just joining this conversation, I have but one question: Are you sitting down? No? Fine. Don't get mad when I tried to warn you. Are you ready for this? I mean...seriously. Are you ready for this? Because what I am about to tell you is some of the most absurd sh*t I have heard all year. Ready? Go.
Center

When asked about his collaboration with Quincy for the album set to be released in May or June, Akon responded,

When Quincy called and told me about this album, I said you have to let me do "Strawberry Letter 23" and the funny thing is that's the song he was thinking about already. We brought a new modern feel to this classic and I think everyone's going to really enjoy it."

Ludacris and Naturally 7 (produced by Naturally 7) on the title track "Soul Bossa Nostra," a hip-hop revamp of Jones' 1962 single "Soul Bossa Nova" which was re-born as the Austin Powers theme song and was sampled by Ludacris on his 2005 single "Number One Spot" for which he garnered a VMA.

It would be crazy for me to mention the previous bastardizations of La Costra Nostra right now, right? Like La Coka Nostra or any of the myriad rappers in the '90s who have overused this term to death. I'm sure Q would say that it's merely a reference to an alliance of people not related by blood all united for a common aim. Kind of like how this new album has been described as:

Some of today's biggest recording artists and producers have joined together to celebrate the music of multi-Grammy winning producer, composer and arranger Quincy Jones by recording contemporary versions of popular recordings from his massive catalog for a new album from Interscope Records entitled Q: Soul Bossa Nostra. A "family celebration"...

Allow me to recap: Quincy Jones had Akon in mind for a cover of lead single "Strawberry Letter 23" when exactly twenty years earlier Quincy had Tevin Campbell in mind for lead single "Tomorrow" from Back On The Block. I'm sure Quincy would tell me that I need to get with the times, man. The kids want to hear artists whose hustle is greater than their talent. But I also remember the haphazardly assembled from "We Are The World 25" that mostly consisted of "artists" whose hustle was by far exceedingly greater than their talent. Oy. And just for good measure, Q and Lionel made sure there was a Spanish version, too. Ay dios mio.

I know this is a lot to handle all at once. But remember how I told you to sit down earlier? It was more like a plea. Thought it was over?
Ready for this nugget? Okay. Don't say you weren't warned. Clearly, Snoop Dogg's interaction with Quincy--he's set to appear on a Brothers Johnson classic "Get The Funk Out Of My Face"--must have altered some of his brain cells up there.

One day Quincy Jones said to me, 'When you rap it sounds like Miles Davis playing his trumpet'," Dogg explained...Miles isn't a hero, but a desire and a challenge...That's the reason why I want to play him.

Snoop Dogg wants to play Miles Davis in a movie. Ponder that for a bit.

To Snoop and Quincy's credit, this last quote was in reference to a biopic that both Snoop and Quincy feel should be made on Miles Davis. I agree. Not about Snoop sounding like Miles' trumpet, but about the biopic being long overdue. As far as Snoop sounding like that legendary trumpet, I'll defer to Quincy since he was there. I wasn't even close to being born yet. But I'm still side-eyeing at my computer screen as hard as any woman could right now.

I'm sure voicing my disdain over some of Quincy's most recent musical choices will not get me into anymore exclusive Hollywood parties. But I'll just sneak my way in and grab a gift bag or four anyway. I'm not quite sure what exactly is going on in Quincy's mind these days. It certainly looks to be that he will not be stopping anytime soon. For those of you as appalled as I am, all this will mean is the continued boycott of most terrestrial radio. Thanks, Quincy.