Raheem DeVaughn’s ‘Masterpeace’ Is A Masterpiece 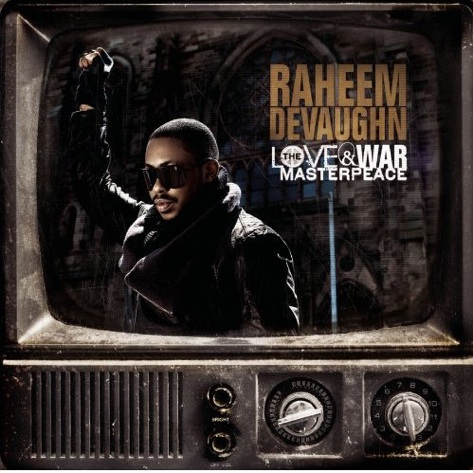 With a resounding introduction speech from none other than Dr. Cornel West, Raheem DeVaughn's new album, The Love & War Masterpeace, begins with an exclamation point that doesn't end, even after the last song.
Center

"...we talkin' about revitalization..." Dr. West says about this CD and
that is what this release does--it revitalizes the game, taking it next
level. DeVaughn does what Marvin Gaye did so effortlessly it
seemed--speak of political and social issues within a musical landscape
that never lacks in rich Soul melodies and grit. Raheem's sound is
heavily marked by Marvin's influence on this disc--particularly on the
endlessly beautiful "Garden of Love"--and this new project would make
the legend proud. Where other Gaye imitators like Chico DeBarge and Robin Thicke
have borrowed only from his playbook, Raheem has used Marvin's sound as
a springboard to create a contemporary fusion of old and new. With Ludacris on the first single, "Bulletproof," Raheem brings us the next chapter in the book that What's Going On began about our lives "...here, overseas and across the waters..."


Raheem is evidently in a mood of collaboration (as we saw with his recent feature on Tabi Bonney's "Fever") and this CD is heavy with featured guests on songs besides Luda, including Wale on the head-nodder "Greatness," Damian Marley on the socially critical "Revelations 2010" and Malik Yusef
on the very sexy ballad "Fragile". Every single one of these collabos
work. Wale adds the necessary lyrical flow to "Greatness" without
taking the focus away from Raheem, while Marley on "Revelations 2010"
adds the funk to this already Soul-blazed song about the social and
political war on Black men.

The best collaboration on the CD,
however, is "Nobody Wins a War," which is 100 times better than any
tribute song we've heard with a heavy set of celebrity vocalists on the
mic. This song features Raheem on lead with verses and chorus sung by
the likes of Jill Scott, Bilal, Anthony Hamilton, Algebra, Chrisette Michele, Shelby Johnson, Ledisi, Citizen Cope, Dwele, Chico DeBarge and Rudy Currence. Pure beauty.

The Love & War Masterpeace is searingly open and honest.
While Raheem is a superior vocalist, with a falsetto that is equally
matched with stellar lower registers, he has taken as much care with
his lyrics this go round as he has with his voice. The track "Black and
Blue" about domestic abuse is a welcome addition to this collection in
the aftermath of the Chris Brown and Rihanna drama that
has brought the question of unhealthy relationships to the forefront.
Still speaking of relationships on "My Wife," Raheem tells it like India.Arie
did on her song "Ready for Love," letting the world know he is ready to
receive his life partner. "...don't want no girlfriend..." he sings,
"...not five, not three, just one."