Jamiroquai To Tour This Summer…In Europe At Least 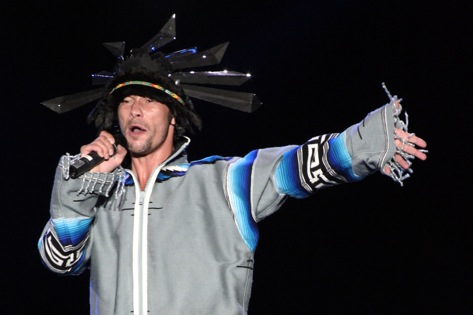 Earlier this week a friend brought up Jamiroquai in conversation, and I've been on a kick ever since--dialing them up on my iPod, watching their videos on YouTube and wondering just where in the heck the acid jazz outfit led by frontman Jay Kay had disappeared to. Come to find out that they haven't disappeared at all and are in the midst of recording their seventh studio album and first since 2005, in addition to touring Europe this summer. That's great news--for Europeans and those who can just pick up and jaunt across the pond to attend concerts. Personally, I'm gonna need Jamiroquai to do their stateside fans (i.e., me!) a huge favor and perform somewhere--anywhere--that I can get to. Seeing Jay Kay and the crew in concert has been on my bucket list for years, and until I got it like that to fly abroad to see them or find a suitable sponsor who can make that happen, I'll impatiently wait. For our lucky European friends, check out the tour dates after the bounce.
Center


TAGS:  jamiroquai, jay kay
Previous: Janelle Monáe Takes Us Far, Far Away With Album Trailer Next: Where Is The ‘Flesh’ On Kelis’ Album Cover?