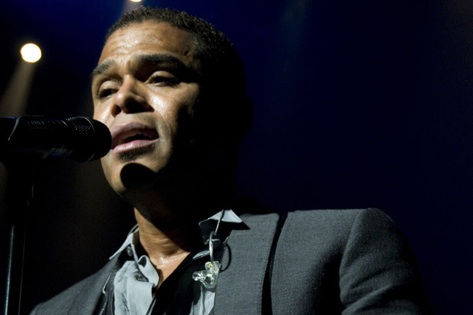 I am not ashamed to admit (though I probably should be) that I have begun to watch the show Dancing with the Stars this season. The comedy that has ensued thus far--between the gracelessness of poor Kate Gosselin to the raunchy-writhing-masquerading-as-dancing by Pam Anderson--has been the most entertaining train wreck on TV for me since the first deplorable episode of VH1's Flavor of Love. And while watching non-dancers try their hand at one of the hardest forms of dance there is can be quite entertaining--hilarious even--ABC's Dancing with the Stars will attempt to draw viewers with real talent when the deliciously soulful singer Maxwell appears on the show on April 20th to perform his newest hit, "Fistful of Tears."

What's even more noteworthy, however, is that "Fistful of Tears" is Maxwell's third consecutive #1 on Billboard's
Urban Adult airplay charts, making him the first male artist to
achieve such a feat. Huge congratulations to Max who is already garnering major buzz around his
upcoming tour, which begins next month. As previously announced, Jill Scott
will join him on tour and a new date has just been added at Madison
Square Garden in NYC on June 26th
that pairs him with Erykah Badu. As if Maxwell and Jill wasn't enough, now fans get to see him and Badu on one bill for the final show of this tour. We can't think of a better way to end it.