Soul Lovers To Artists: Stop Trying To Be So Young 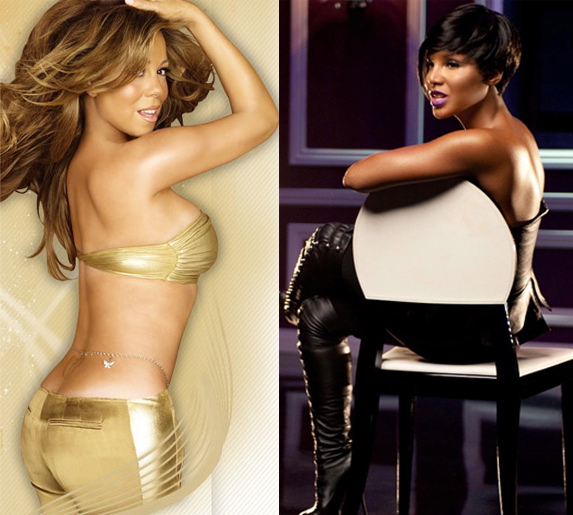 I was reading a really interesting article on SoulTracks the other day, highlighting the barrage of R&B artists who have left their physical prime and are now pandering to a younger audience. We've seen this occur in increasing frequency with disastrous results. On one pole of delusion and wanting to be the eternal post-pubescent girl-child is Mariah Carey and her phalanx of butterflies. On the opposite pole we have Toni Braxton who seems to have settled in well with accepting what she sounds best at singing, is not grinding on everything not nailed down, nor electronically modifying her already gorgeous voice.
Center

We all know--or at least that was the assumption--why these artists all begin to sport midlife career crises like the latest Crooks & Castles gear. If the young'uns don't pay attention to you, you're over. Right? Jay-Z may have garnered critical acclaim with American Gangster, one of his best albums since The Blueprint, but we all knew a foray down fraternity row was coming once The Blueprint 3 dropped. Not to mention that Jay-Z literally has been listed as being 37-years-old for at least the past 5 years. Do the math.

But what if the assumption that younger people buy more records was false? Strange concept to wrap your head around isn't it? Because then that may ultimately mean that maturing divas wouldn't have to be forced to sing old jazz standards and ballads and may be able to strut around like older Amazonian goddesses such as Nona Hendryx or Grace Jones if they wanted to. Chris Rizik recently summed it up best by writing:

Part of delusion behind all this is the mistaken logic that the major record companies were singing for years: young people buy music and people over 30 don't. That was the music Gospel, until they found out it was completely false. Aside from teen artist Taylor Swift, the biggest selling albums of the past 3 years have been from artists like Michael Buble, Josh Groban, Carrie Underwood and Susan Boyle - artists who draw substantially from older audiences. The over 30 crowd buys more CDs, illegally downloads less and, frankly, has more money to spend on concerts and recorded music. And nowhere has that been more evident than in the new soul movement.

Ha! Well, I'll be. What will this mean for the casual or devoted soul music listener? I have no idea. Not everyone is able to fend themselves off well from mutiple persons telling you what is hot now and backing their notions up with bogus figures. To the newer and older crop of soul singers I implore you to do your research. Arm yourself with what really does sell so that you can honestly come forth with a body of work that is more reflective of your experiences instead of what blackened, steel, spiked revolver of love Rihanna may be sing-talking about these days. Unless that's your thing. In which case that's all on you. But let's applaud those who continue to write from their hearts, and in the process get nominated for awards and receive accolades in the process. (See: Hathaway, Lalah; Roberson, Eric, Exchange, Foreign; and Glasper, Robert). In closing, our time may be coming, but since us 30-somethings and older have already put our money where our mouths are, it's time for more of our beloved artists to step up to the plate and demand better music that better represents themselves.