Zo! & Friends To Bring The Heat With ‘SunStorm’ 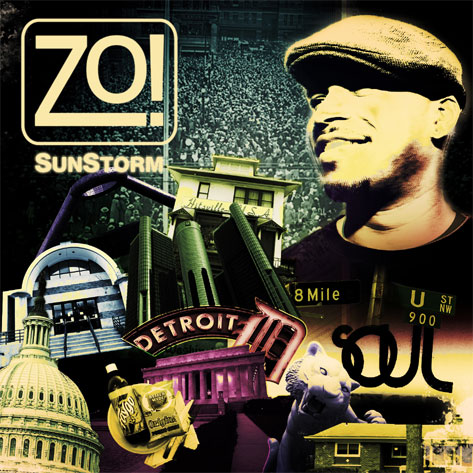 If you thought the first half of 2010 was filled with some stellar releases and musical gems, then you aren't even ready for what the second half of the year will bring. Highest on my ever-growing list of Albums I Can't Wait To Get My Hands On is The Foreign Exchange family member Zo! with his latest, SunStorm. Dropping on July 27th, this is the album that we've been waiting for from the talented multi-instrumentalist and producer. A modern day Quincy Jones, he has enlisted some of the best independent artists to lend their voices to this project. With Eric Roberson, Sy Smith, Lady Alma, Jesse Boykins III, Chantae Cann, Monica Blaire, Carlitta Durand, Rapper Big Pooh, Darien Brockington, Phonte and YahZarah on the album, you already know that it's going to be nothing short of fantastic. As quiet is kept, I've gotten a sneak preview of some cuts from SunStorm, and it's going to be a serious problem when it drops this summer. Peep the album cover above--showing love to Zo!'s hometown of Detroit and his current residence in DC--and hit the bounce to salivate over the tracklisting.
Center

1. Greater Than The Sun feat. Phonte
2. Greatest Weapon Of All Time feat. Sy Smith
3. Say How You Feel feat. Carlitta Durand and Phonte
4. For Leslie
5. Be Your Man feat. Darien Brockington
6. Free Your Mind feat. Lady Alma
7. SunStorm feat. YahZarah
8. If I Could Tell You No feat. Jesse Boykins III
9. This Could Be The Night feat. Eric Roberson, Darien Brockington & Rapper Big Pooh
10. Flight Of The Blackbyrd feat. Phonte
11. All Is Well With Love feat. Chantae Cann
12. Make Luv 2 Me feat. Monica Blaire