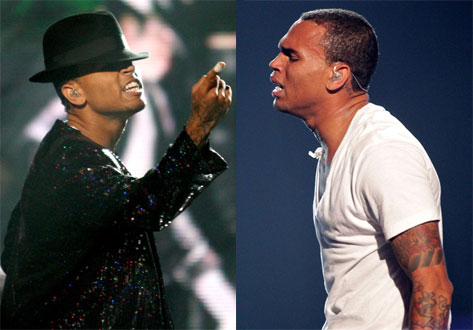 The talk of last night's BET Awards wasn't the highly-anticipated Prince tribute, El DeBarge's surprise return to the stage, or even the fact that the ceremony was honestly one of BET's best to date. No, the moment in the show that has everyone talking--and choosing sides--was Chris Brown's Michael Jackson tribute used to mark the one-year anniversary of the King of Pop's untimely death. Before Brown took the stage, his performance was introduced by Jermaine Jackson as the one we've all been waiting for. Really? I beg to differ.
Center

The tribute started out with Chris Brown dressed like MJ from the video for "The Way You Make Me Feel," mimicking his iconic dance moves and lip-syncing his way through the song before a quick segue into "Remember the Time" and more dancing. The flyest part of this segment came next and actually had nothing to do with Brown when the houselights went down and a group of dancers in lighted outfits danced to "Smooth Criminal." Chris returned to the stage in a sequined jacket to dance to "Billie Jean." The houselights dimmed once again to the tune of Mike's "Man In the Mirror" with scenes of people undergoing hardships flashing across the screen. Chris returned to the stage with a mic in hand and before he could even bring it near to his lips to sing, he started to get emotional, which led into a full-blown breakdown while attempting to sing. See for yourself until BET & Viacom snatch this off the net.

Proclamations that "Chris Brown is back!" and about how awesome the
tribute was have abounded. However, there's a segment of the population, myself included, who thinks that the performance was far from
all that and that it was all a calculated PR stunt to get him back in people's good graces. Chris Brown needed to nail this Jackson tribute, and it just didn't happen. Sure, Breezy is a good dancer, but so are Usher, Omarion and Ginuwine, who could have all done equally as fantastic dance tributes, since that's really all that this was. A true professional knows how to overcome his or her emotions and sing through the pain. How are you going to do a proper tribute to Michael Jackson and barely sing a lick? C'mon, son. Furthermore, once everything was over and done with, it was almost as if this was more about Chris Brown than it was about Michael Jackson.

After 2009's domestic violence incident with Rihanna, CB has had a hard road to travel. But it's a road that he paved, so that's on him. We're all for second chances, see the aforementioned El DeBarge, but such chances are earned not just given out all willy nilly. And Chris Brown is quite simply not there yet. He needs to spend some more time with the man in the mirror, indeed.

But this is just my opinion, I want to know what you think, SoulBouncers. Was Chris Brown's Michael Jackson the genuine article or a GTFOH moment?