There's a party in the desert and apparently only half-naked women are invited. Such is the case in N.E.R.D.'s video for their new single, "Hot-n-Fun." The video shows Pharrell, Chad Hugo and Shay joined by Nelly Furtado cruising through the desert, scooping up midriff baring, Native American headdress-wearing hitchhikers. While the song is typical N.E.R.D. fare, to say the video borders on the ridiculous is an understatement. Even though I know as a video--a N.E.R.D. vid at that--I shouldn't expect much in way of logic. However, I just couldn't wrap my brain around why anyone would be rocking a fur hat in the middle of the desert. I mean, it is hot right?! At any rate, you decide if the video is hot or not. I could just be too old to comprehend fur hats, bikini tops and boots. 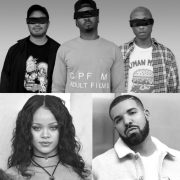