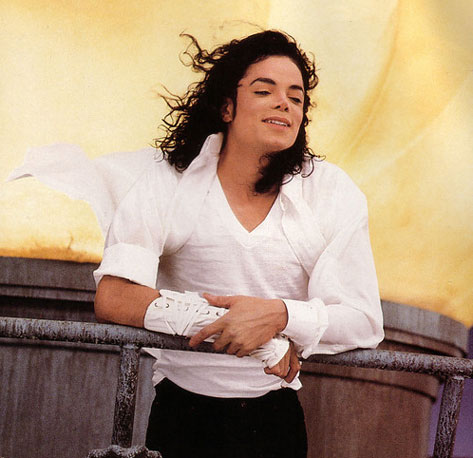 "Black Or White" was the first single off of Michael Jackson's 1991 Dangerous album, produced by Michael and Bill Bottrell.
This song makes the countdown because no other song so aptly described
Michael's hope for a colorblind world than this one. With the
lyrics, Jackson claimed his right to love and be who he chose to be,
regardless of skin color. With a punching delivery matched with an
equal feel of joie-de-vivre, Michael had us humming along as we, too,
agreed in that moment that it "don't matter if you're black or white."

The corresponding video, which featured "IT" boy of the '90s Macaulay Culkin (miming a guitar riff by Guns N' Roses guitarist, Slash),
was a cultural feast. In it, MJ reveled in our racial and ethnic differnce and ended with cutting-edge computer technology
that morphed faces of people of different genders, races and ages as an outro to the
song. Who didn't love watching this video that featured a cameo from
supermodel Tyra Banks and artful dance sequences of
Michael dancing with groups of people from every
continent? The video's popularity soared as it was released on MTV,
BET, VH1 and the then-new FOX network. What some may have forgotten is
the controversy that surrounded the video in its original form where
Michael morphed into a panther and then began to dance in a manner that
some viewed as suggestive and highly sexualized, leading to the
censoring of the video on some stations before the removal of the
ending sequence from the video entirely. How tragic, given the
endearing sentiment of the song.

Despite the drama that initially ensued, both the video and song "Black Or White" have left an
indelible mark as part of Michael's legacy of racial harmony and
popularity that has transcended color lines for decades.