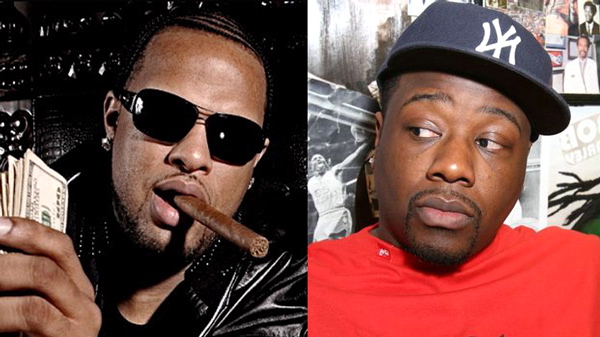 I haven't read VIBE magazine since I've stopped listening to terrestrial radio. I also haven't paid much attention to Slim Thug since AJ and Free hosted 106th & Park and I'm not quite sure why VIBE paid much attention to him either, but everyone has their reasons. I do know that Slim Thug infiltrated my Twitter timeline feed a couple of days ago because of some comments he made in an interview on VIBE.com regarding Black women's refusal to take responsibility for the overall dire state of Black romantic relationships. I didn't want to pay attention to it, but in doing so I unearthed something interesting.
Center

Most single Black women feel like they don't want to settle for less. Their standards are too high right now. They have to understand that successful Black men are kind of extinct. We're important. It's hard to find us so Black women have to bow down and let it be known that they gotta start working hard; they gotta start cooking and being down for they man more...Black women need to stand by their man more. Don't always put the pressure of if I'm fucking with you, you gotta buy me this and that. Black men are the ones that motherfuckers need [but] I think a lot of them need to step it up too.

Now, before you start rolling your necks and eyes, take a look at what Phonte recently had to say regarding his thoughts on Black women's lack of accountability in relationships.

As for my least favorite thing about Black women, I would say its their overall lack of accountability for their actions. For instance, you can turn on the TV, pick up any magazine, or go to any website and find articles about the failure of Black men and how we ain't doin this or not doing that. But nobody wants to address Black women's f-ck ups, ESPECIALLY Black women...lol. And one big flaw I see in Black women is how quick they are to tell their men that they don't need them, and how dismissive they can be. But its total bullsh*t, and no one calls em on it. You can't scream, "I'm an independent woman!" in one breath, but then when little MarQuavius turns 15 and shoots up the whole fuck*n block its, "THESE KIDS NEED DEY DEDDY!!" The fact is, we need each other. And I wish Black women would understand that there's nothing wrong with admitting that you need a man. And there's nothing 'weak' about being sweet and nurturing to a good man who deserves it.

As far as my opinion, I think they're both correct. Personally this is the same advice that my parents, who just celebrated their 20-year anniversary, gave me as a teenager after I made some remark about not needing a man once I got a career. I do believe that we as a community need to press the reset button, let bygones be bygones and start loving each other more. But since I'm not Rodney King, I know that holding grudges cannot allow the slate to be wiped clean, even when it comes to love.

But who cares about my opinion. The essential question is this: Are Slim Thug's comments, generally perceived as harsh and insensitive, wrong? If so, isn't Phonte essentially making the same point, albeit more eloquently and less laden with Ebonics and thus more intelligible to some? Let us know your thoughts in the comments.


TAGS:  can't we all just get along", phonte, slim thug, vibe
Previous: The Foreign Exchange To Bring ‘Authenticity’ This October Next: Shafiq Husayn Has A ‘Plan’