A ‘Wake Up’ Call From John Legend, The Roots, Melanie Fiona & Common 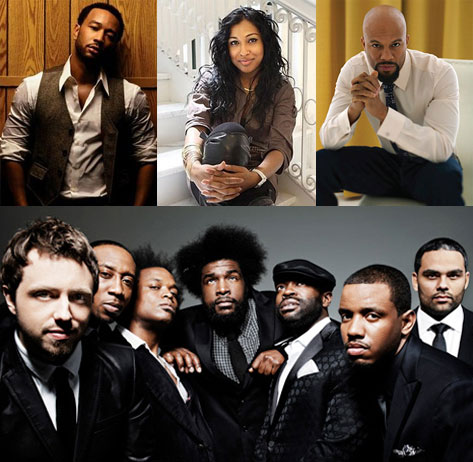 The second half of 2010 is sounding as lovely as the first half did, and one album that many are buzzing about is Wake Up!, the upcoming collaboration from John Legend and The Roots. Stellar artists on their own, Legend and the Legendary Roots Crew are combining forces for what is sure to be an out-of-this-world pairing from what I'm hearing. Adding some extra flavor to their mix will be Melanie Fiona and Common who join the gang on a remake of Harold Melvin & the Blue Notes' classic "Wake Up Everybody." As poignant and timely now as it was when the original was released in 1975, Legend and Fiona sound fantastic together and The Roots are killing it as they are known to do. Oddly enough, although I love Common, I didn't love him on this song. His bars were good but unnecessary here in my opinion; this could have stood as just a duet between John and Melanie. I'd actually enjoy hearing more of those two together. Nonetheless, this is very solid and just as enjoyable.
Center