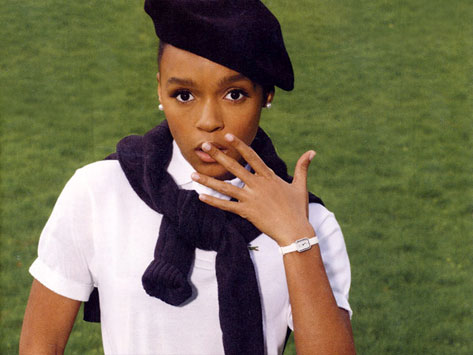 Apparently there are rumblings that beloved weirdo and self-processed "alien from outer space" Janelle Monáe bats for the girls. I'd never heard the rumor myself nor had it once ever crossed my mind that she might date women, but apparently somebody's tongue somewhere is wagging about it. In a recent interview with Rolling Stone, Monáe addressed the rumor in her typically unique fashion:

Monáe's sci-fi weirdness can feel a bit forced; when asked if she still attends church (she was raised Baptist), she only says, "I attend an Android community church in Metropolis." She gives a similar answer when asked about her sexuality (her outré look and penchant for pants over skirts has caused some to wonder if she's gay). "The lesbian community has tried to claim me," she says. "But I only date androids. Nothing like an android--they don't cheat on you."

Now if you're like me (awesome) you chuckled a bit and thought nothing else of it. If not, one of two things probably crossed your mind: 1. "She is gay! If she wasn't, she'd have just denied it!," or 2. "She's probably not gay but much like her 'uniform' this is just a gimmick devised to make people talk more about her." No matter which way you lean, I say who cares? No, really, who does? Would her music sound better or worse either way? Most of us tire of artists cashing in on little more than overt sexuality--onesies and pasties and camel toes, oh my. So Monáe, who makes music that seems to equally appeal to both men and women, and conjures James Brown as much as she does Janis Joplin, de-emphasizes gender specificity in her wardrobe altogether. Yet the fervor builds. We want our women womanly--as defined by patriarchal society as ultra-girly and sexually attractive to men--or the questions arise. We tire of announcements from obviously homosexual public figures (Ricky Martin) but demand them from those who are varying degrees of less obvious with it (Queen Latifah). We want artists to come out just so we can say "We knew that already!" and question the sincerity and timing of when they choose to do it.

"I don't really believe in menswear or womenswear. I just like what I like."--from InStyle, July 2010

The argument can be made that artists owe us nothing, but we're at least due good music, quality performances and interesting choices that keep us anticipating the next song, collaboration and project. Monáe delivers on this front. This witchhunt mentality, that demands that every celebrity damn near open their vulva and let us in--can we be off that? Because frankly, if a lack of diversity in Monáe's wardrobe is the only thing standing between you digging her or refusing to listen to her music altogether, then you're kind of an asshole anyway.
Besides, androids are rather hot. They keep going and going and going. [H/T: TRU]