Jesse Boykins III Makes Us Wanna Get ‘Closer’ To Him 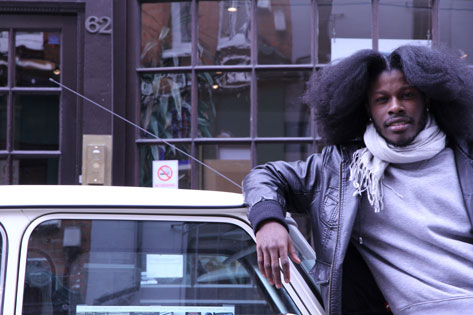 I'd be the first to admit that I was running a little bit late to the Jesse Boykins III
bandwagon. When I finally hopped onboard, however, I spent a ridiculous amount of time
kicking myself for sleeping on this brother with the fluffy hair and sensuously
soothing voice. So to hear that he put his voice to Corinne Bailey Rae's sexy
tune, "Closer," just about sent me to through the roof. And ladies, JB3 doesn't
disappoint. Easily my favorite song from Bailey Rae's album, The Sea, it
would've been easy to ruin a good thing. However Boykins not only does it
justice, he takes it and makes it his own. Where Corinne's original oozes with
sensuality and restrained passion, JB's version pours it all over the aural senses,
allowing the passion to burst from the seams. Not sure about you guys, but after
listening to his voice ride the song's slow groove, I know I definitely wanted him
to get closer to me!
Center