Solange Says Fro Changed How She Sings, Is Bored With R&B 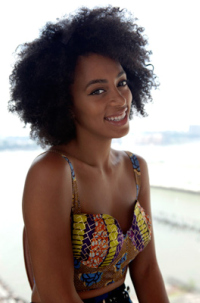 Never the one to shy away from stating her opinion, Solange was pretty candid about her current musical tastes in an fashion interview for Refinery 29. After retreating to Cali to smoke herb, blow into beer bottles and play flower vases to find the inspiration to record tracks for her upcoming album, she's pretty radiant and causual. She's also fully embraced her indie sensibilities, stating that while she grew up on and loved '90s R&B like SWV and Aaliyah, today's iteration of the genre just isn't cutting it for her. I still dig her cover of the Dirty Projectors' "Stillness Is The Move" but that doesn't seem like enough genre-bending cache for her to be so smug about the fact that Chairlift's Caroline Polachek had to remind her of the goodness that is TLC's "Creep." We'll just have to wait and let the new music speak for itself. [H/T: R29]
Right